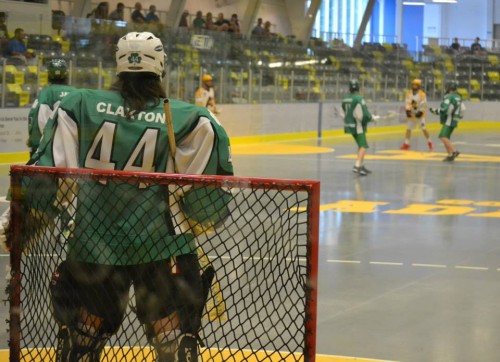 This Week: vs. New Westminster

The Adanacs continue to roll as the BCJALL’s most feared team and they proved they can win in a couple different ways. But one thing remains the same no matter what type of game they play: they defend incredibly well and they get great goaltending for Christian del Bianco, who is sporting a .858 save percentage behind that juggernaut D.

Coquitlam gets a great test this week as the rival Salmonbellies make a trip to the Palace on Poirier on Tuesday.

This Week: @ Coquitlam, vs. Port Coquitlam

Their record might be 7-5, but the ‘Bellies have gotten most of their returning players back and seem destined to go on a roll to end the regular season.

Connor Robinson leads the troops up front with a four point per game pace (36 points in 9 games) and New West is big, tough and athletic on the back end. They closed out the week with two strong wins over formidable opponents but get their biggest test of the year thus far in their meeting with the Adanacs on Tuesday. New West is tied for second in goals allowed with 103 goals in 12 games, a sign their goaltending is holding up through this portion of the season. Should the goaltending remain consistent, New West should be right there competing for a spot in this years Mino Cup.

This Week: vs. Victoria

While not many teams are distancing themselves from one another, the Islanders have a two game lead over the Shamrocks for second place in the league at 11-4 and don’t seem to be slowing down. They put up 22 on the Lakers last week on the strength of a 10 point night from Spencer Bromley and seven assists for the facilitating Tre Leclaire.

The Islanders host the Shamrocks next weekend in what should be the biggest game of both team’s years to date. A loss would put Delta in tough position to hold off Victoria for the rest of the year, as the Shammys have two games in hand and a win would have them only a game behind.

This Week: vs. Delta, vs. Coquitlam

The Shamrocks have one of the most balanced attacks in the league with many of their offensive players shooting over 20 per cent. With Charles Claxton coming up with big performances in net – he leads the league in wins with eight and is second in both goals against average and save percentage – the Shamrocks could be the team that ends up challenging Coquitlam for the league championship.

We’ll get a better chance to see what the Rocks are made of with games upcoming against the Islanders and Adanacs.

This Week: vs. Port Coquitlam, vs. Nanaimo

It has been a trying year for lacrosse at the Langley Events Centre, something that has reached their Junior A team as well. And although they weren’t victorious in either of their games last week, they should good mettle in hanging tough with New Westminster and tying the T-Men. With two winnable games on the horizon, the Thunder have a real opportunity to make some noise in the latter half of the season.

This Week: vs. Langley, vs. Burnaby

The biggest problem for the T-Men is getting consistent goal scoring; they’re dead last in the BCJALL with just 103 goals scored. The upside, though, is that Nanaimo is back in a playoff position. If the playoffs started today, Nanaimo would be matched up with New West who they have played very competitively so far this season.

Another critical week for a team as Nanaimo plays Langley and Burnaby and they need to keep pace or risk being caught in the playoff race.

This Week: vs. Nanaimo

Burnaby needs to make a decision ahead of the trade deadline of whether they’re going to make a potentially futile push for the playoffs with the group they have, or sacrifice a couple of players for some draft picks and more youth. Aidan Milburn is second in the league with 28 goals but they can’t seem to keep the goals out of their own. The Lakers have allowed 18 more goals than the next team and their leading goaltender in terms of minutes played has a .706 save percentage. Part of that is due to the continuity Burnaby hasn’t had in terms of getting their players out – far too many players on their roster have missed significant time.

This Week: vs. Langley, vs. New Westminster

Are the Saints the worst team in the BCJALL? Definitely not, but this week wasn’t the greatest and it puts them in a tough position to catch New Westminster and home floor advantage in the playoffs. After losing four straight, a big win over the Islanders might’ve been what the doctor ordered for Poco. Their game against the Bellies should be a telling sign of where this team is heading.