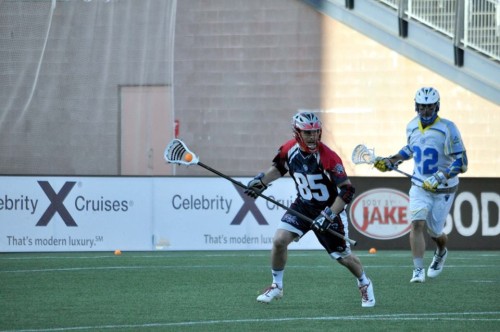 Drafting is one of the keys to team building in any sport. There are many examples of this; the current two Stanley Cup teams, the Tampa Bay Lightning and Chicago Blackhawks, have had some of the best drafting in the NHL to get to this point.

Major League Lacrosse is the same, and the top teams have some of the best draft selections. But what about the all stars? In sports (other than fan voting which is skewed), one of the best ways to determine a player’s historical greatness is all star appearances.

We set out this week to determine which team is drafting the most MLL all stars, which players are consistent all stats, and just how these two subjects relate. Remember, some of these players are no longer with their drafted teams. We want to see who is drafting the top players, not who is collecting the top already established players.

Anthony Kelly- Drafted by the Los Angeles Riptide in 2005.

Paul Rabil (NY)- Obviously, he’s on the Lizards now but the Cannons drafted Rabil and he spent most of his career in Boston. A former first overall out of Hopkins.

Scott Ratliff- Ratliff has become one of the better defenders in MLL and the shut down guy for the Cannons.

Will Manny- The new leader and face of the team. Drafted out of UMass.

Brendan Fowler- A second round pick in 2014, Fowler has cured the historic faceoff woes the Hounds have struggled with.

Tucker Durkin (FLA)- Durkin never played a game with the Hounds despite being their third overall pick in 2013.

Tyler Fiorito- The Bayhawks have locked down a solid starting goalie thanks to the 2012 second rounder.

Matt Mackrides- 2012 fourth round draft selection in what turned out to be a really solid draft year for the Bayhawks.

Drew Snider (DEN)- Snider is a Washington state native so it made sense for him to be traded to Denver, but this once again proves how well Chesapeake drafted in 2012.

Jeremy Sieverts (DEN)- Drafted by the Bayhawks in the 2010 supplemental draft.

Matt Abbott- Abbott was the 9th overall pick in the 2009 draft.

Mike Evans- Evans was the 18th overall pick to the Bayhawks in 2009.

Eric Law- The Denver product goes to the Outlaws, as they all seem to do. 2013 selection.

Jesse Schwartzman- Drafted by the Outlaws 39th overall in 2007.

Kieran McArdle- the 2014 MLL rookie of the year and former third overall pick out of St. John’s. He’s emerged as a star with the Launch as their first true draft selection.

Jeremy Boltus (ROC)- Technically this was a Hamilton Nationals pick but this is the same franchise.

Greg Gurenlian (NY)- This is weird because the Rattlers drafted him, but it was the old Rattlers before they moved to Toronto and then Hamilton and then Boca Raton.

Ryan Flanagan (CHA)- Was drafted by Hamilton in the 2011 draft.

Marcus Holman- One of three straight picks the Machine held in the second round of 2013, selected right after Logan Schuss. Has become one of the most dominant offensive players in the league.

Tom Schrieber- Schrieber was the first overall pick to Ohio in 2014.

Joe Fletcher- The Lizards have drafted some serious offense over the years, but Fletcher has become an elite defenseman in the league as well.

Jojo Marasco- Fifth round pick that slipped through the cracks to the Lizards. A terrific draft pick.

Brian Karalunas (OHIO)- Was a part of the Ohio-Boston Rabil trade this season, so this all star was also the piece to adding another all star.

Drew Adams- The Lizards all star goalie was drafted out of Penn State in 2009.

John Galloway- Drafting goalies is difficult, but the Rattlers found a way to find a solid netminder for years to come with the Syracuse grad.

Mike Manley- The Rattlers have drafted really well over the years. 2012 third overall selection goes to the defenseman.

Jordan Wolf- Second overall pick in the 2014 draft out of Duke.

Ned Crotty (NY)- This was actually a selection by the Chicago Machine who moved to Rochester. Was traded to New York for Mark Matthews.

Craig Bunker (BOS)- Drafted by the Rattlers in the 2012 supplemental draft.

There are a few odd conclusions to jump through with this analysis. It appears Rochester and Chesapeake have done the best job. Rochester had six draft picks who are all stars, three of which are the core of their team. The Bayhawks have seven, and five have stayed on the roster. They’ve always had an obvious draft advantage with all the Maryland players in their backyard.

Florida is super weird because they’ve been four different teams, and really McArdle is their only guy that the Launch truly selected. New York has kept four players on their roster who are drafted all stars.

Boston has been a dreadful drafting team for a long time, but Ratliff and Manny are positive signs for their future direction.

Los Angeles drafted two all stars as well, so… Congrats to them?

This was an interesting examination at who is drafting all stars, and the Bayhawks are the champions. Good luck to everyone in Houston!