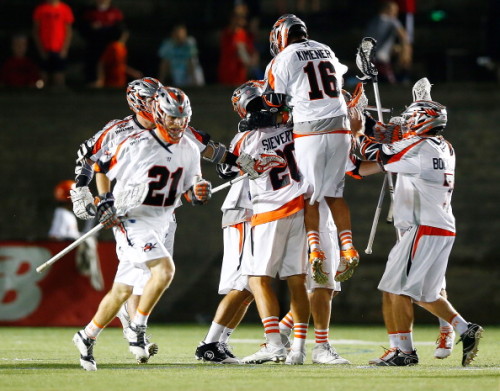 Last week’s Major League Lacrosse results only led to more questions than answers, in terms of the postseason. With just one week remaining, one team has clinched a postseason berth. Here are our three stars from the week that was.

Bocklet helped Denver win its fifth and sixth straight games last week, beginning with 11 groundballs in a 12-10 win at Rochester before adding nine GBs and his second goal of the season in a 15-12 victory vs. Charlotte. In Thursday’s win at Rochester, the Outlaws allowed just four first-half goals while they allowed only two second-half scores in Saturday’s win over Chesapeake. The defensive effort allowed the Denver offense to turn a 10-9 halftime deficit into a 15-12 win. For the season, Bocklet owns exactly 100 groundballs, third in the league and most among a non-faceoff specialist.

For the second straight week, Rabi is among our top stars. He began the week with a monster eight-point performance in an 18-12 win over Chesapeake Thursday night. Rabil tallied five goals, including a first-quarter two-point goal, and two assists. All eight of his points happened by the end of the third quarter as the Lizards took a commanding 17-9 lead after 45 minutes of play. Rabil continued with a six-point (three-goal, three-assist) effort in a 14-13 overtime loss at Boston Saturday. The Johns Hopkins product is now tied with teammate Rob Pannell for the MLL lead with 67 points on the season.

Buchanan tallied three points against New York Saturday, and his final point couldn’t come at a bigger time. His goal just 51 seconds into overtime gave Boston a crucial 14-13 victory, keeping the Cannons squarely in the mix for a postseason berth. Buchanan also assisted on the game-tying goal with less than three minutes remaining in regulation, and added a third-quarter goal. Buchanan now owns 19 points this season.