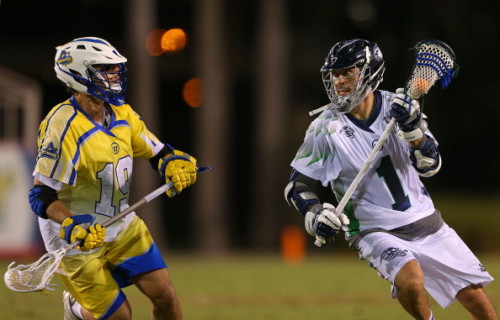 An exciting weekend of Major League Lacrosse action is in the books as the standings continue to tighten up near the top. Heading into Saturday’s All-Star game, six teams are within one game of each other. Check out our three stars from this past week.

Walters helped spearhead an impressive 2-0 week for Chesapeake. He began with six points (three goals, three assists) in a 16-13 win at Ohio on Thursday. All six points came by the end of the third quarter as the Bayhawks took a 12-8 lead after 45 minutes. Walters then tallied a team-high seven points (three goals, four assists) in the Bayhawks’ 17-14 win over New York Saturday. The Maryland alum had one point in the first quarter then two in the second, third and fourth quarters, respectively, as his team took a 12-4 halftime lead. For the season, Walters now owns a team-leading 39 points in just eight games behind 18 goals and 21 assists. With the 2-0 week, Chesapeake is now in sole possession of third place in the MLL standings with a 6-4 record, a half game out of first.

Chanenchuck posted eight points, including the game-winner in overtime, as part of Charlotte’s thrilling 15-14 comeback win at Atlanta on Saturday. After falling behind 10-5 at the half, Chanenchuck posted six of his eight points in the second half and overtime, which included having a hand in the Hounds’ final four goals of the game. He scored goals with 1:35 and 12 seconds remaining to even the score at 14 before scoring just 43 seconds into overtime. He is now up to a team-leading 35 points on the season. With the victory, Charlotte is tied for first place (with New York) with a 6-3 record while Atlanta falls to 3-6.

For the second straight week, our number three star is a defenseman from Boston. This week, Merrill takes the honors after recording eight groundballs and three caused turnovers (most in the MLL for the week) while spearheading a defense which allowed just seven goals. The Cannons took a 7-3 lead after one quarter, but the Boston defense bore down and didn’t allow a goal for 41:13 spanning the end of the first quarter through the beginning of the fourth. The Rattlers scored the first three goals of the fourth quarter to pull within 11-6, but that’s as close as they would get as Boston won, 13-7. The Cannons improved to 6-5 while Rochester fell to 5-4.