There was quite a bit of action this weekend that had big impacts on the rankings.  Syracuse had their first loss, Duke lost to North Carolina, Albany won 25-0, Georgetown lost after finally getting into the list, and the Patriot league happened.

The Patriot league continues to be the most confusing thing in the lacrosse world right now.  Navy sits at the top with the best league record, but then there are four 3-2 teams, one 3-3, and one 2-3.  Sometimes a poorly put together graphic can help illustrate something like this, so here’s my attempt.  It basically is just a big, messy spider web of everyone beating LaFayette, Navy having one loss, and then chaos. 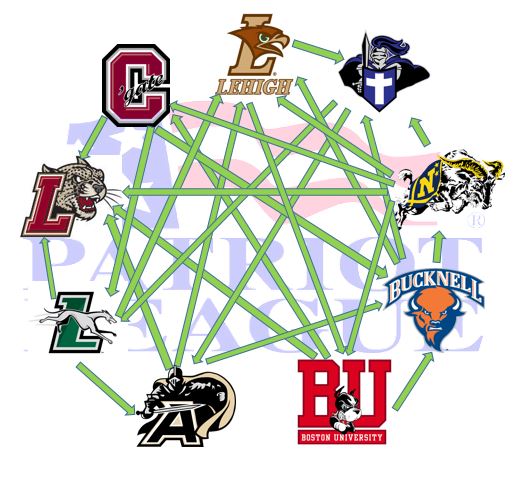 Records and scores are including games from March 29.

I’ll be honest.  It does hurt a little bit to put Maryland as the top team.  Out of my top 20 last week, they are tied for the sixth fewest games against ranked teams.  They are really taking care of business against everyone else though.  They have the highest points for to points against ratio in the country, which I use to effectively compare scoring margin without taking total number of games into account.  Their defense has been fantastic.  I would love to see this defense against Albany’s offense.

Notre Dame has been the team all season that my metric hasn’t been able to appropriately capture.  Going by raw numbers, they’re now ranked fourth.  This is the highest they’ve been all year, but there is no question this team should be universally one or two in the country, probably one.  Their win over Syracuse was huge.  They displayed great defense from start to finish.

Syracuse finally lost, but it took everything Notre Dame had.  Dylan Donahue was amazing for the Orange, but as a whole, they just couldn’t sink the shots they have all year.  This was their first true road game all year, but they return back to the comfort of the Carrier Dome to face Albany in a mid-week battle.  The scoreboard might get tired.

UNC had a nice, narrow win over Duke to open their ACC schedule.  They now have just ACC teams left on their schedule followed by the ACC tournament.  This team could finish anywhere from 10-5 to 15-1 and I wouldn’t be surprised with any result in between.

While they have lost their last two, they’ve been against the two previous teams, so I’m letting them hover.  Duke hasn’t lost two in a row since 2011, when they lost to #1 Syracuse and then #4 Denver almost a week later at the start of April.  Sound a little familiar?  That was still a final four team, so I doubt John Danowski is losing too much sleep about a one point loss, but they will be 2-2 at best in the ACC.  This is putting them in danger of missing the conference tournament if they don’t get those two wins.  Notre Dame is up next and Duke hasn’t lost three in a row since Danowski has been coaching there.

Denver blew out a Georgetown team that was really starting to crack their ceiling.  This was the Denver team we were hoping to see all year long.

Virginia had a little bit of a breather this week and beat up on a couple of in-state rivals with Richmond and VMI.  VMI wasn’t going to be much of a contest, but I expected Richmond to play UVA a little closer.  They will be brought to reality quickly as they face North Carolina next.

Yes, they won two games and dropped two spots.  It happens.  As the Brown schedule is getting harder, their eye popping numbers are dropping a little bit.  They had an overtime win against Marist followed by a two goal win against Princeton.  This team is still very impressive and very dangerous.

The Big Red had a quiet week, with just an 8-2 win over Dartmouth.  Their next date with Harvard won’t be so quiet.

Army scored a big eight point win over a surging Bucknell team.  See the above discussion about the Patriot League.

Albany has this guy named Lyle Thompson who is pretty good at lacrosse.  Shockingly, he recorded only two goals and no assists in Albany’s dominating 25-0 win over first year program UMass-Lowell.  This team has plenty of offensive weapons who are going to be put to a true test this week in Syracuse.

Navy beat up on Boston University, winning 14-6.  They sit atop the Patriot League right now and are looking better each week.  Loyola and Army are up next, which will either cement them as the top team in the league, or bring them down into the mess.

Marquette is getting into the meat of their schedule and beat a tough Villanova team by one.  They have another week to enjoy playing two teams with losing records before they travel to visit Notre Dame.  I don’t think they’re going to look that far ahead just yet.

After losing to Brown, the Tigers sit at 2-2 against ranked opponents and 4-0 against unranked.  Their next game against Stony Brook is a great showcase for two teams fighting to be mentioned in conversations with teams having good post season potential.

Yes, they fall even though they beat Penn by eight.  They have two games this week that should help them quite a bit though.  First is Sacred Heart, and then Dartmouth on Saturday.  Unfortunately, the teams in front of them might not move at all either.

A good two goal win over Penn State helped erase the memory of their zero goal performance a week ago.  This also marked the start of the B1G slate and Hopkins is up next.  Who knows what will happen there.

A big win over Vermont this week, which should have been the case.  Next up is Quinnipiac, which they should also run away with.  Princeton on Saturday will be the better test as they will be just the second of three ranked teams they play all season.

Towson had a low scoring 6-3 win over UMass.  Three of their remaining four games are against teams with losing records.  If they win out and take the Colonial title, which is entirely reasonable to see happening, this could be another NCAA team.  That has only happened six times in this millennium for Towson.

Richmond won big over NJIT and then lost big to Virginia.  Overall, their resume is looking good and this second year program has a legitimate shot at another NCAA tournament if they can win their conference’s automatic bid.

Towson is the only other team remaining on their schedule with a winning record.  Expect those two to fight it out for the Colonial title.