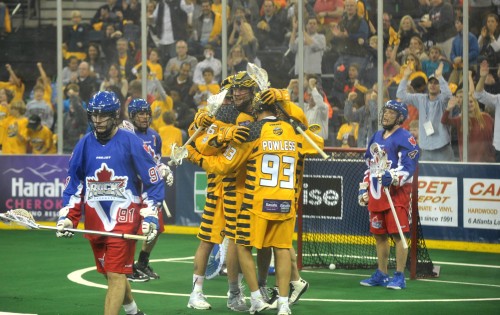 Although offence stole the headlines in Week 5, Evan Kirk‘s dominance in between the pipes reminded us lacrosse isn’t all about filling the net. Kirk continued his dominant start to 2016, making an impressive 56 stops en route to a 15-11 win over Buffalo on Saturday night. Kirk currently leads all goaltender in goals against average with 8.25, nearly 2.00 better than the next best average. The Orangeville, ON native also leads in save percentage with .844 and is tied for the most wins with three.

Second Star: Shawn Evans—New England Black Wolves
The 2015 Most Valuable Player Shawn Evans is off to a hot start to his 2016 MVP campaign, leading the New England Black Wolves to a 3-1 record to open the year. Saturday night was no different for Evans, potting two goals and seven assists for nine points. Evans has 12 goals and 12 assists for 24 points, shy six points of the NLL lead (Adam Jones and Callum Crawford). Although the season is young, if Evans was to repeat as MVP he would be the first player to win back to back Most Valuable Player awards since John Tavares did in 2000-01.

First Star: Johnny Powless—Georgia Swarm
The Georgia Swarm had a huge weekend, picking up two victories while posting 33 goals. A big part of that offensive explosion was Georgia newcomer Johnny Powless. The 2014 Lou Marsh Award finalist finished with seven goals and six assists for 13 points in two games over the weekend. In the huge 20-17 victory against Toronto, Powless had a hat-trick and added three assists. The next night, Powless tallied four goals and three helpers for seven points against his former team the Rochester Knighthawks. The 22-year-old lefty has 26 points in five games, tied with rookie Randy Staats for the team lead in scoring. Teammates Shayne Jackson and Lyle Thompson could have also found their way into the three stars after netting 13 points each this weekend.