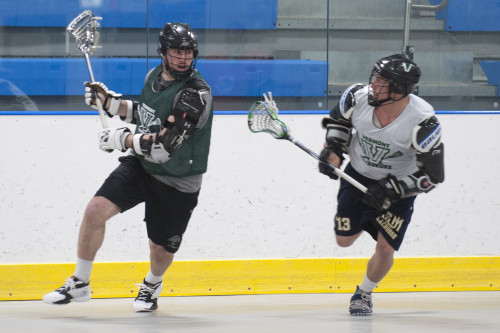 1.     The Capital Axemen are 11-1 in league play so far and look like the clear favorite to run away with a league title on the way to the Presidents Cup. Tim Bergin is leading not only the offense but also the league with 74 points. Tim had a good CLax season and transferred that over right to summer ball where he has been one of the best this season. Nick Sanseverino went to the Presidents with the Akwesasne Outlawz last season now is an Axemen this summer. He has scored 37 points for second best on his team along as a top point getter in the league.  Also joining the team are Georgia Swarm players Callum and Ian Crawford.  Callum has eight points his first two games while Ian is Axemen property for the rest of the season as he has boosted up the teams back end. Also Kedoh Hill has seen action in two games so far and should be making more appearances as the season moves on.

2.     Vermont is the only American team in this league and they are stacked with players who are trying out for team USA and also a few team Israel players. Brandon Dube’s forty-nine points are second best in the league as this player has dropped five points in each of the last three games. Trevor Wagar (36 Points) Greg Rogowski (35 points) and Ethan Farrell  (34ponts) are right there to round out the teams top scores and top offensive players. On defense, Taylor Smoke, who was on the Iroquois world field team last summer, has been doing great this summer and goalie Joe Evans is one of the top goalies as he is trying to make a run at a spot on team USA. Vermont has had one of their best seasons in 2015 and are going to get a top playoff spot.

3.     Kahnawake Mohawks have been to the President’s Cup the past two summers but now are sitting third ranked. Ben Green has twenty –nine points and Mark Kirby twenty-eight are leading the offensive scoring. The Mohawks also have Ty and Corey Thompsons as two of their top players. Ty has been on the team for the best three summers while Corey has won a presidents cup with the St. Regis Braves in 2012 and has been a top Sr. B player the best few summers. Former NLL player Peter Jacobs has seen time in the lineup for a few games scoring nine points while the biggest pick up is Caleb Wiles who has not played yet this summer but will surely boost the teams production on offense. Alexandre Fortier has been the starting goalie all season but Mike Thompson who has only played in one game so far should be the starter come playoff time.

4.     The Kahnawake Tomahawks are sitting last in the league but Nick Angus is third in points with forty-seven and has been a top player in the league so far. Arontase Paul has twenty-one points and his second on his team and rounds out the leagues top scorers. On defense Dave Thomas as been a top defender and also has added eight points. The Tomahawks can just play spoiler for the rest of the way as they have a good team but just haven’t been able to put it all together.