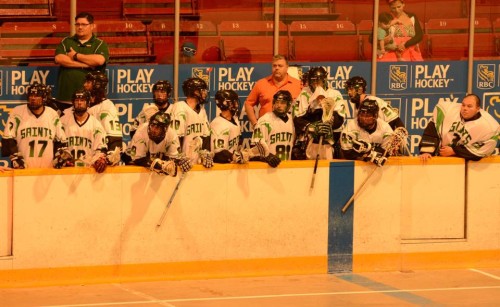 The past week of Senior “B” action saw six games on the schedule across the league. The Brooklin Merchants led the way with three games, with Ennismore, St. Catharines and Wallaceburg seeing action twice, while Owen Sound, Oakvile and Six Nations took to the floor just once. There where a ton of standout performances throughout the six games on the schedule this past week, however the following three players had outstanding weekends for their respective teams, and are deserving off this Week’s three star honors.
Dylan Goddard – Brooklin Merchants
Goddard has brought his lethal scoring touch over from the St. Catharines Saints, where he spent last season, racking up 40 points in just twelve games. This past week Goddard led the Merchants offensively, as he has been doing throughout the season thus far. With six goals and four assists over a three game weekend, Goddard added to his Team leading point total, and now sits with a total of 31 points in nine games. Goddard started the week off slow, with a goal and an assist in a win over Ennismore, however he displayed his impressive distribution skills in the Merchants narrow 10-9 loss to the Rivermen, picking up a goal and three assists for four points. Goddard would save his best performance for last, as he racked up four goals and one assist for five points against his former teamon Sunday, however the Merchants would go on to lose the game by a score of 10-8.
Torey Van Every – St. Catharines Saints
Van Every was acquired in a trade with Six Nations early on in the week, and wasted know time getting acclimated to his new surroundings as Van Every went on to lead the Saints in scoring over their two game weekend. Van Every has toiled with the Six Nations Slash of the Can-Am league for part of the last three seasons, having also had a brief stint with the OLA’s Rivermen as well. Van Every picked up six goals and three assists for nine points in his two appearances this week, making his St. Catharines Saints debut on Saturday night in a game against Ennismore. Van Every picked up 2 goals & 2 assists in that game, however his four goals and one assist on Sunday afternoon in a come from behind victory over the Brooklin Merchants was what earned him a star this week. Not only did Van Every score four goals on Sunday afternoon, they all came in the clutch with the Saints down heading into the third period of play.
Jon Mason – Oakville Titans
Mason was sent to the Titans last year at the trade deadline, since his arrival in Oakville all he’s done is put up point for the Titans. The elder statesmen of the Titans roster, Mason showed his veteran leadership and scoring prowess on Sunday afternoon, as he racked up an outstanding two goals & six assists for eight points in the Titans dismantling of the Wallaceburg Trashers by a score of 20-6. Mason currently leads the Titans in scoring this season with 10 goals & 15 assists for 25 points in 8 games, and had been leading the Brooklin Merchants in scoring last season prior to his trade. In Mason’s last 22 games split between Brooklin and Oakville he has tallied a total of 69 points.