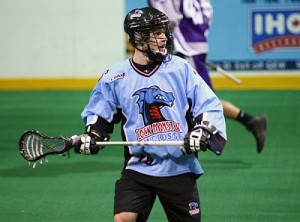 Third Star: Ian Martin—Ohsweken Demons
Ian Martin had a strong opening weekend for the Ohsweken Demons, netting six goals and four assists in two games. In Friday’s season opener, Martin tallied four points (2 G, 2 A) in the Demons 14-12 loss to the Barrie Blizzard on Friday. The next night, the Six Nation Arrows product followed up with an impressive six point (4 G, 2 A) performance in Ohsweken’s 15-13 win over Southwest, earning him the first star of the game.

Second Star: Shane Scott—Barrie Blizzard
Shane Scott found the back of the net six times to help lift the defending Creator’s Cup Champion Barrie Blizzard to a 14-12 win over the Ohsweken Demons in a rematch of the 2015 CLax finals. Five of his six goals came before each team headed into the locker room for half time. On Scott’s fifth goal, he corralled an errand pass behind him with one hand, beat his defender and finished off with a sweet fake and tucked the ball past Jake Lazore.

First Star: Corey Fowler—Niagara Lock Monsters
For the past three seasons, Corey Fowler has been one of CLax’s most potent scorers, and it seems like 2016 will be no different. The Niagara-On-The-Lake native scored four goals and added four assists for eight points in the Lock Monster’s season opening loss to the Durham Turfdogs (14-13). Fowler has 60 goals, 101 assists for 161 points in 32 career CLax games, good enough for fourth all-time.