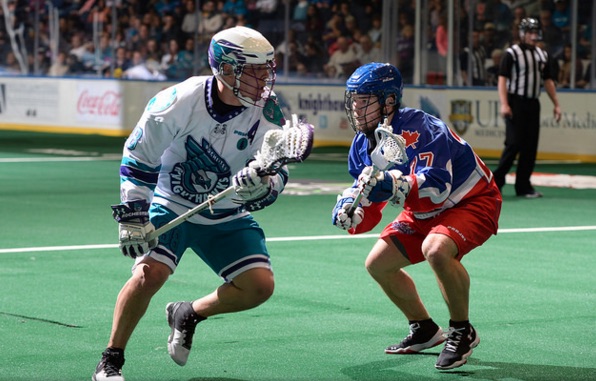 Third Star: Matt Vinc—Rochester Knighthawks
If the Rock’s already struggling offence had any chance of heating up this weekend, Matt Vinc took that chance and stomped on it. The five-time NLL Goaltender of the Year made 76 stops on 88 attempts to propel Rochester to a pair of victories over Toronto in week three. Vinc is third in GAA (9.33) and save percentage (.796) after three games in 2016.

Second Star: Adam Jones—Colorado Mammoth
For the second straight week, Adam Jones finds himself as the ILWT second star. Jones had a stellar night, netting six goals and two helpers in the Colorado Mammoth’s overtime victory over the Buffalo Bandits. Six of his eight points came in the first half alone. The Owen Sound, ON native is the league leader in goals with 13 and is tied for second in points with 23.

First Star: Cody Jamieson—Rochester Knighthawks
Who knew that Cody Jamieson’s achilles tear last season could be the best thing to happen in his career? After his road to recovery, Jamieson is in the best shape of his life and looks virtually unstoppable. The Syracuse Orange product buried five goals and 13 assists for 18 points in two victories over the Toronto Rock in week three. 10 of those 18 points came in an dominating performance last Thursday night at the Air Canada Centre, spoiling the Rock’s home opener. Jamieson currently leads the league in scoring with 25 points.