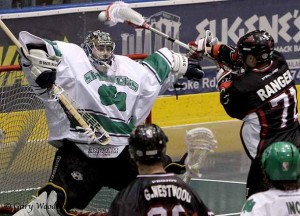 This Week: vs. Coquitlam

Despite losing their first game of the season to the Langley Thunder last night, and my previous hesitance to put them at number one at any point, the ‘Bellies make their debut at the top of these power rankings.

Last Sunday’s game against the Burrards showed me exactly what Steve Goodwin’s team is capable of when the playoffs roll around. Their combination of stellar defense and free-flowing offense could be the recipe for success against the Shamrocks. They get some very consistent goaltending from Alexis Buque and Eric Penney and have retained some of the core that made up their previous Mann Cup runs.

The ‘Bellies and Shamrocks play next Friday night at The Q Centre in the most anticipated game of this young season.

This Week: vs. Coquitlam, vs. Maple Ridge

Although they didn’t play this week, the Shamrocks will get two good tests this weekend with the surging Adanacs and another tango with the Burrards.

After getting Dan Dawson into the lineup a few weeks ago, some more of their players that had NLL obligations will begin to trickle back, including new signing Aaron Bold. Bold just came off a Champions Cup win with the Edmonton Rush and provides more depth in net, despite Cody Hagedorn having a solid start to the season.

This Week: vs. Victoria, vs. New West, vs. Burnaby

Credit where credit is due, the Adanacs have shaken off the cobwebs of a slow and controversial start to their season and are above .500, which many didn’t expect. And although they might not be in this spot when next week’s rankings roll around, they won two pivotal games that have them in fourth place.

Goaltender Dan Lewis is providing some excellent backstopping for the A’s, with back-to-back stellar performances. Now that the Adanacs are getting Travis Cornwall back from the NLL, they’re starting to play much more consistently. They have a young roster, but guys like Vincent Ricci, Kyle Dobbie and Daniel Perreault are providing some firepower. In the A’s win over the T-Men, Ricci had a four point night with a goal and three assists.

This Week: vs. Maple Ridge

Such is life in a parity-filled league like the Western Lacrosse Association, as the Thunder know all about. A loss here, a win there – beyond New Westminster, six teams are within four points of each other. A close loss to the Lakers was followed up by what is probably the Thunder’s best performance of the season, giving the fish their first loss of the campaign.

It was a bittersweet performance for a couple of former Junior Salmonbellie grads. Rocky Bowman was able to beat his old team with a quality 44-save performance while Anthony Malcom paced all scorers with three goals on seven shots as he continues his impressive streak to start the season.

This Week: vs. Coquitlam

The Lakers are a great team, with some exciting young talent and an excellent offense, but they’ve been very up and down throughout the start of the season. If their offensive output doesn’t make up for their deficiencies in goal, then the Lakers won’t win very many games.

While guys like Tyler Digby and Robert Church haven’t gotten into the lineup very much, Jason Jones and Dane Stevens have done their fair shares for the offense. They’re currently No. 3 and 4 in points with 28 and 26, respectively. They’re also one-two in assists; Jones leads with 21 and Stevens has 18.

This Week: vs. Victoria, vs. Langley

Maple Ridge might be the team with the most fluctuation through their first seven games. One game, they’ll look completely out of it – such as the 13-6 loss to Victoria in their home opener. Then they’ll fall just short against undefeated New Westminster but show excellent resilience in making a third period comeback. They have the defense, goaltending and offense to be a threat in the playoffs, so what’s missing?

While I’ve written about Daniel Amesbury’s fighting abilities and how that can change the landscape and momentum of a game, sometimes the Burrards overall undisciplined play gets them in more trouble than they would like to admit. They fell behind last weekend to New West in large part to a couple of poor penalties taken; then again, they seemed more energized after the best fight so far in the season between Amesbury and Ontario import Broedie Birkhof.

They’re still a team to watch through the middle portion of the season.

The Timbermen will have a week or so off to examine what’s gone wrong since scoring a couple of huge wins over their Island rivals Victoria to open the year. They’ve now lost five straight but have remained competitive in most of their games. It could just be about finding the right fit for Kaleb Toth’s club.

In better news, Brody Eastwood continues his solid season, moving into a tie for third in goals with Athan Iannucci and Logan Schuss with 11. Zak Boychuk is still playing consistently, stopping shots at a .822 clip and allowing 8.42 goals per game. I still believe Nanaimo is a team that can pull it together and make a run for the playoffs, but they need to find a way to stem the bleeding and get a couple more wins under their belt.