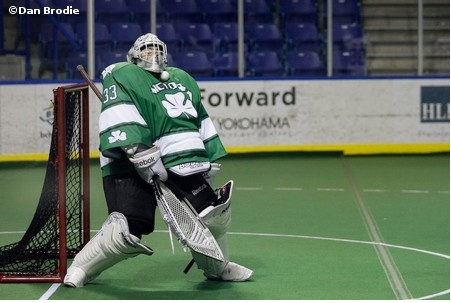 The Shamrocks closed out two tough games against opponents up to the task of trying to upset the defending champions, but life won’t get any easier for the green and white.

Victoria has reclaimed a share of first place thanks to back-to-back Bellies losses, making a statement in the third period of their one goal win at home to the Adanacs. Two days later in Maple Ridge, Jon Harnett scored with one second left on a telegraphed pass on what should’ve been the last play of the game. That game produced runs of four and six goals for Victoria and Ridge, respectively, over the course of the final 40 minutes.

They’ll get a chance to strengthen their league lead by playing New West twice over the next six days. They also make a trip to Coquitlam Saturday night to take on the upstart Adanacs.

The Bellies will look to get back on track after a pair of losses disrupted their six wins to start the year as they visit the Island for a pair of games against the Shamrocks and Timbermen in an intriguing back-to-back for the team.

New Westminster, for maybe the first time all year, got outplayed in the goaltending department as Adam Shute got hot and stopped 50 of 54 shots. Although the Bellies may have been a little undermanned in Coquitlam, but the lack of offense may have been a little concerning to some, but it’s more than likely a case of luck not going their way.

Be on the lookout for a potential trap game Saturday in Nanaimo. The T-Men have had a long period of rest and will be looking to reverse a five-game losing streak, while New West will be coming off a tough game against Victoria.

This Week: vs. Langley

Since the arrival of new goaltender Tye Belanger, the Lakers have reeled off three wins in a row and now sit third in the WLA standings.

Belanger only saw 37 shots against as Burnaby was able to shut down Coquitlam’s offense and ended up making 33 saves for a .892 save percentage. Robert Church is having a strong start since coming back from Edmonton’s NLL run – he had two goals on 11 shots in the win. Burnaby has a tough test next week with Langley coming into town as they look to make it four in a row.

This Week: vs. Burnaby

On the heels of a big win over the Salmonbellies, Langley had an offensive outburst at home against the Burrards to put some distance between the middle and the bottom of the standings.

The Thunder trail only Victoria in goals scored with 82 goals in nine games and they probably get the most balanced scoring outside of the Shamrocks, too.

Rocky Bowman was able to come in and make some key saves down the stretch that allowed Langley to close out the Burrards. Langley got plenty of ball movement on offense with five players have multiple point nights. Another thing I like about the Thunder – they’re winning with a lot of youth on their roster.

This Week: vs. Victoria

Although it may be a struggle to score consistently in the WLA for such a young offensive team, the Adanacs are lucky to have found two quality goaltenders that can keep Coquitlam in virtually every game.

Adam Shute, a former junior goalie with the Okotoks Raiders and recently re-acquired Dan Lewis from Burnaby have teamed to give the Adanacs a run of great performances. Lewis currently sits right behind the Bellies tandem of Buque-Penney in save percentage with an .833 clip. Shute has played just over 100 minutes less than Lewis but is stopping shots at a .840 clip and allowing 22 goals on 138 for a 6.91 goals against average.

Coquitlam gets another shot at Victoria Saturday night at home after playing them to just a one-goal deficit last week on the Island.

This Week: vs. Nanaimo

I don’t think the Burrards record represents the true talent level of this team. With guys like Mike Mallory, Ben McIntosh and Jarrett Davis up front, they have no problems scoring. If they can get their defense in tune and Frankie can find his game after taking on a starter’s workload in the NLL season, Maple Ridge will be dangerous.

But we have to call a spade a spade at this point. They had a tough loss at home to Victoria, a game in which they valiantly put up a six-goal run to bring them back into the game. That resiliency goes a long way, especially if Maple Ridge finds themselves in a similar situation in trying to make the playoffs.

When they host Nanaimo on Sunday, they’ll be plenty rested to put up a big W over a team who will be taking on New West the night before.

This Week: vs. New Westminster, vs. Maple Ridge

Nanaimo were idle this week, giving them some valuable practice time to get ready for a valuable four point weekend. Two pivotal games may be able to swing their fortunes and get them back into the playoff picture. They will get New West a day after they play the Shamrocks in a first place showdown, a great chance to surprise the Bellies and take the win. However, the following night, they travel to the mainland to take on a rested Maple Ridge team that always plays well at home.

Zak Boychuk will continue to play a big part in how this team performs in the standings, but guys like Brody Eastwood will need to continue to carry the offense to more wins.