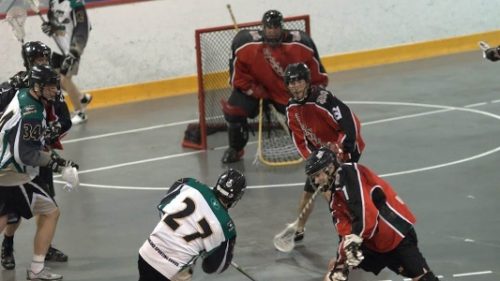 Despite a big overtime win over the Langley Warriors early in the week, the Pioneers’ undefeated season came to an abrupt halt against a North Shore team buoyed by some recent free-agent signings.

Sam Clare scored a pair of goals and added an assist and Ladner had a five goal third-period to secure the win against Langley. They ran into a great power play against North Shore on the weekend and struggled to score in the third against the Indians. Ladner will have to play a lot better against Shore if they can make it into the playoffs, but firmly remain as the number one team for this week.

Despite the loss, the Warriors played Ladner tough and got a big hat-trick from Derek Lowe to keep pace with the Pios. William Vanden Hooven added apples to two of those goals to pace the assist-makers.

Some positives to take away was the fact that Langley held Ladner to no goals in the middle frame. Impressive, especially considering Ladner scores the second-most goals per game and it was on the long change.

They travel to Valley on Friday where they look to get their season back on track. It will be a good litmus test before they play North Shore the week after.

With the signings of players like Athen Iannucci, Kyle Belton and Tyler Garrison, there is no doubt the Indians are automatically one of the most talented rosters the WCSLA will see this year. The question is, was it too late?

Maybe not. Despite Victoria beating Shore 16-10 a few weekends ago, they’ve dropped two straight since then and didn’t play Shore at full strength. Coming over for a Friday night game against a good team is never an easy task, but it could be the start of a big run for North Shore. Shore sits three games back of Victoria but also have a game in hand, making this game even bigger for the team.

The way they were able to dismantle a team that hadn’t lost yet was impressive and things are beginning to look up for them.

A big jump in the rankings this week for the A’s after a complete effort on the road in Valley and a consistent 60 minutes at home to the visiting Victoria Wolves.

Coquitlam will be tough to out in the playoffs because they play their systems so well. On offense, both the righties and the lefties can control the ball, where guys like Trent Evans can find an off-ball cutter. On defense, they play a compact and tough-to-break down game plan. Where that may hurt them, though, is from outside shots. Four of the five goals Valley scored on Wednesday where outside rips, three of those coming from Dylan Pollitt. But they do have two good goaltenders in Jeremy Funk and Riley Camazzola

Coquitlam did need to put some distance between themselves and North Shore and this week did just that for them.

Corey Shires and Andrew Miller are coming up big for the Timbermen offensively, leading Nanaimo in a big nine-goal win over Royal City.

Nanaimo got another big performance from Nick Patterson who stopped 36 of 43 shots. The veteran is still a good bet to keep his team in most games and has had another excellent season so far. Nanaimo travels to the mainland on Father’s Day to take on the Pioneers; if Nanaimo plays well, there’s no reason to think they couldn’t win that game.

Royal City split the weekend Island roady, winning in Victoria before falling to the Timbermen 16-7. More importantly, they kept pace in the race for the playoffs, where they now sit in a three way tie with Nanaimo and Coquitlam.

The Capitals used a seven-goal run in the third period to come from behind and win 14-11. Alec Tuura and Mark Negrin lead Royal City scorers with seven and six points, respectively. They got an additional six assists from Leif Mydske and Michael Flintoff allowed six goals in 40 minutes after replacing Dean Grimm.

However, Nanaimo again got the better of the road team coming on the second back-to-back, scoring 16 goals on Royal City. They’re just another team that couldn’t find an answer in stopping the Corey Shires-Andrew Miller connection, who had a combined 14 points. Turra and Negrin again led Royal City in scoring.

It’s a big week for Victoria as they play arguably the two toughest teams in the league right now. And for a team that has just lost two straight to teams they’re battling for a playoff spot with, it doesn’t bode all that well for the Wolves.

However, this team has played pretty consistent throughout the year and play a good team game. They don’t have to rely on any one player, getting it done by committee and backed up with some strong goaltending. While they do face two tough tests, they would be happy with a split but could give a scare to both teams.

After that, Victoria ends the year with Nanaimo, Langley and Valley. It’s a tough end to the season for Victoria, but if they do well they will find themselves right in the thick of the playoff race.

While Valley has still gone without a win this season, the performances are getting better and a little more consistent. The Rebels were struck with low turnout numbers this year and have to have an eye on rebuilding that team a little.

Valley still has good players, with Dylan Pollitt and Matt Sweet as leaders, the question will be finding enough depth so they can compete with teams better than they have been. There are bright spots – they battled with Coquitlam for half the game before effectively running out of gas. The focus until the end of the year should be on finding a W and getting back on track.