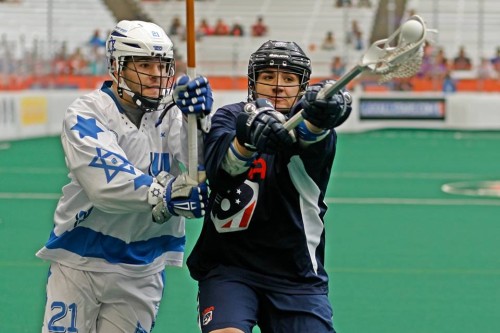 Team USA might not have won gold or played in the championship game but they showed that they were capable of winning games and won some in blowout fashion. Yes ,Canada and Team Iroquois are still steps ahead of the United States in box lacrosse and both those teams were able to handle USA fairly easy but in all three of those games USA never did give up. The likes of Joe Walters and Joe Resetarits were the top forwards and they had leadership with Casey Powell and youth with Blaze Riorden.

The defense had many NLL players such has Joel White and Chris O’Dougherty, but the goalie situation was one many people shook their heads at. But with the likes of Jake Henhawk, who is a veteran of team USA and current goalie of St. Catherines Saints and Oshweken Demons, David Mather, a current WLA goalie, and Chris Collins former NLL net minder. All three have a great amount of box experience with Jake being Native American while David is from Washington state and Chris who calls Yorktown, NY his hometown.  All three had their time in net seeing a ton of shots in the losses but also playing very well in the team’s four victories. One of highlights of the goalies was when Mather stuffed Lyle Thompson on a penalty shot in the first game of the tournament.

After a tough game getting beat by Iroquois, USA bounced back with a 14-7 win over the Czech Republic. Leading the way on offense were New England Black Wolves’ Kevin Buchannan and Garrett Thul. In game three Casey Powell arrived at the tournament, scoring five points in a 13-9 victory over England, a team with a few NLL players on its roster.

With a 2-1 record it made things exciting, as USA looked to upset team Canada in a huge match up in their fourth tournament game. Things just didn’t go as they wanted, and much like game one USA played catch up against Canada and in the end Canada was just too good, walking away 18-7 win. With a third place finish in group play team USA was set to face Ireland in playoff action.

Coming out with a huge 22-2 win, Casey Powell had eleven points (4G, 7A) while Joe Walters nine points (1G, 8A). Kevin Buchanan picked up eight points along with Drew Snider, who is more known for field, had seven points helping their team to the big victory.

They were off to play the Iroquois in the semifinals and things did not go as planned, losing to the host team 17-10. Yes, USA was not able to go for gold but Sunday playing in the Carrier Dome the team came out on fire and beat Israel 15-4 to take home bronze. This team may have not taken first or second but at least they were able to medal and play a part of growing the box games in the states. As the game is getting bigger around the country, USA can make a serious push in 2019.