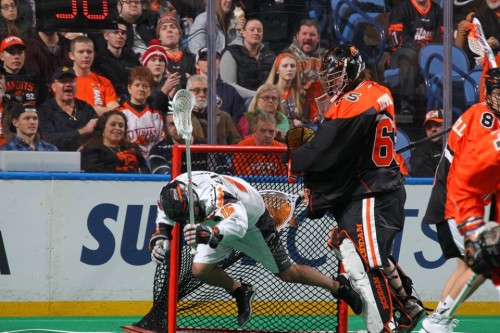 Last night the Buffalo Bandits (15-5) advanced to the Champions Cup after defeating the BlackWolves (11-10) 20-15 and winning the series 2-0.  This will be the Bandits first appearance since 2008, when they defeated the Portland LumberJax 14-13.

It didn’t take long for the Bandits to get the ball rolling.  Jay Thorimbert won the opening draw and took a pass from Mitch Jones to net the first goal of the game at the :11 mark.  Mark Steenhuis then netted his first of the game to increase the Bandit lead to 2-0, and the game wasn’t three minutes old yet.

The Blackwolves would not go quietly as they would go on a four goal run to take a 4-2 lead and temporary control of the game.  Both teams would alternate goals and the Bandits would trail 5-3.

The second quarter saw ten goals being scored, five on the power-play and one short-handed.  Anthony Malcolm and Mark Steenhuis would score goals one minute into the second quarter to tie the game at five.  The first turning point of the game came at 4:39 when Mitch DeSnoo took a five minute major for illegal cross check, score was tied 6-6.  Pat Saunders and Kevin Crowley would score during the major to give the Blackwolves an 8-6 lead.  Derek Suddons would score short-handed to give them a three goal lead, and some breathing room.

But as we know, this is a game of runs.  Buffalo would score the final three goals of the second quarter and the half would end tied 9-9. As the third quarter would start, the Bandits once again would score the first goal to start it off.

Neither team could get on a run as they would alternate goals throughout the third, with Buffalo coming out on top 14-13 as we went into the final quarter.  Both goaltenders stood tall not allowing the other team to get on any type of a run and kept their teams in the thick of the battle.

New England has nothing to hang their heads about.  This was a team who went 4-14 last year and finished at the bottom of the league.  Now with Glenn Clark at the helm, Jim Veltman helping the defense and Tracey Kelusky as the offensive coach the team improved to 10-8 this season and stayed in the hunt for first place the entire season.