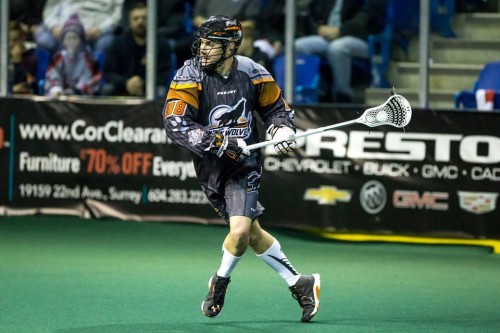 If someone were to show you a tape of the Vancouver Stealth’s 17-7 loss to the New England Black Wolves, you would have sworn you were watching tape of last year’s team.

In a “no excuses” season for the Stealth, the team came out with a lackluster performance, falling to the visiting Black Wolves for their third season-opening loss in as many as years since relocating to Langley, B.C. Many of the criticisms of last year’s team—slow in transition, too perimeter-oriented on offense and not enough good goaltending—reared its ugly head again on Saturday night. Goalie Eric Penney, in his first game as a full-time starting goalie, allowed 11 goals on 31 shots before getting the pull for Chris Levis, who didn’t fare much better.

However, for as much as the Stealth did wrong, New England played a textbook road game. Evan Kirk was tremendous in net after having a rough first quarter, stopping 48 of 55 shots. New England’s defense, led by the underrated Brett Manney, kept the Stealth on the perimeter for much of the game with a pressure defense. They let Kirk see virtually every shot and didn’t get into the dirty areas enough, a testament to the efforts concentrated on that end by the Black Wolves.

“We seemed a little slow out there tonight, we weren’t moving our feet, a lot of our shots were flat-footed shots,” Stealth head coach Dan Perreault said. “We weren’t getting good looks and we gotta work on getting loose balls.”

Although the Stealth won the loose ball battle 29-24, they didn’t look great in doing so. Too many times during one-on-one battles a New England player came out of traffic with the ball. That was compounded by a slow transition game that allowed New England to score far too many goals on either the fast-break or off turnovers.

Garrett Billings scored the first goal of the season—and his first for the Stealth—for Vancouver on the power play at 11:30 of the first quarter, but didn’t make as big of an impact as most hoped. He clashed at times with Rhys Duch on the right side and figuring that out took far too long for the Stealth offense. Perreault didn’t chalk it up as much to the spacing in the offense, placing the blame on the entire offense.

“Offensively we didn’t move our feet during the game. When Billings had the ball, we never had any cutters or any movement,” Perreault said.

“They just ran away with it in the second half,” Billings said after the game. “I thought we got a lot of good opportunities but he [Kirk] was just a stone wall all night long. One thing I didn’t like is when we started playing how you’re not supposed to when you’re down. Up or down you got to play the same way and we gotta learn that lesson.”

Scott Evans demonstrated why he should probably be considered as the best player of the 2015 calendar year with a six-point night (four goals, two assists) that included some excellent work on special teams and a couple of great individual efforts. He scored a gutsy goal at 4:50 of the second quarter that was a thing of beauty—shaking off two Stealth defenders on the wall to the right of Eric Penney, he fired a quick shot from a poor angle that caught Penney off his post and squeaked in. Evans later set up Pat Saunders with a pinpoint pass through traffic that allowed Saunders to beat Penney before he could get across to make the save. Evans also had a couple of rips that afforded Penney no chance to make a save.

It doesn’t get much easier for Vancouver as they travel to Saskatchewan next week to take on the defending champion Rush. Perreault is hoping the return of Matt Beers, who served a game suspension that he received at the end of his last season with the Stealth, will be a boon to their defensive efforts.

“Matt’s a big part of this team, but the guys we put in have to get the job done.”

New England hosts the 0-2 Calgary Roughnecks next week, where Shawn Evans will face off against his old team.