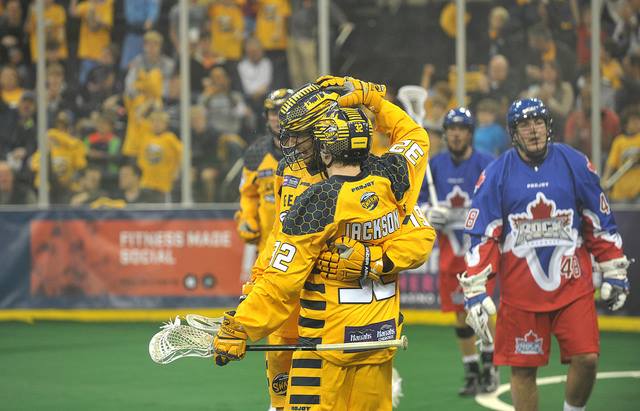 The Georgia Swarm showed a strong offensive mindset in their first game in their new home of Gwinnett, Georgia. The Swarm beat the Toronto Rock 12-7 in the game last night. Johnny Powless and Randy Staats led the way for the Swarm. The Swarm also showed a much better defense than they had a season ago.

The Swarm started off slowly in the first quarter spotting the Rock a two goal lead before Johnny Powless got the first of four goals and five points. The Swarm tied the game shortly thereafter on Randy Staats fourth goal of the season on a power play due to a Brock Sorensen roughing penalty. The Rock and Swarm finished the first quarter the way they started it, tied, although by the end of the first the game was tied at 4-all.

After the first, Powless already had himself a hat trick, Jesse King had two assists, Kiel Matisz had three helpers himself, and Shayne Jackson sat with two assists as well.

The game stayed within a tightly contested style for much of the game. At the half the Swarm held a one goal lead on the Rock, 7-6. Unfortunately for the Rock the game turned on them quickly; they only scored once in the second half while allowing five goals. The game finished with an empty net goal by Jordan MacIntosh and a final goal for the Rock, which was their first and only goal for the second half. The Swarm were able to cruise for most of the second half with their dominant offense and their good goaltending by Brodie MacDonald.

The Rock were lead by Stephan Leblanc and Rob Hellyer. Leblanc led the team with six points (2 G, 4 A), while Hellyer led the way in goals with three (3 G, 2 A). Other point getters for the Rock included Brett Hickey (1 G, 1 A), Jeff Gilbert (1 G), Colin Doyle (2 A). Brodie Merrill, Kasey Beirnes, and Turner Evans also had an assist each. Nick Rose got the loss in the game, giving up 11 goals on 43 shots. He also garnered a save percentage of 74 percent.

The Swarm offense was lead on two seven-point nights by Randy Staats (3 G, 4 A) and Kiel Matisz (1 G, 6 A). They were followed up on the stats sheet by Johnny Powless and Shayne Jackson who both had five points. Jackson went off for two goals and three assists, while Powless garnered four goals and one assist. The Thompsons were held without goals but both did gain an assist each.

Brodie MacDonald came out of the game with his first win of the season, allowing seven goals on 42 shots on goal. MacDonald made 35 saves for a save percentage of 83 percent. This was also MacDonald’s first win since he came on in relief of Zach Higgins on May 2 of last year, which was his only win of the year.

The Swarm will play next week against the New England Blackwolves on Jan. 17 back in Georgia, while the Rock will be playing on a Thursday night game against the Rochester Knighhawks.