Brett Queener strutted across the floor during warm ups one night in Philadelphia and saw a little girl who gave him a thumbs up when it seemed like everyone else was booing. The boos made sense – Philly fans never give the opposing team a warm welcome.

The little girl couldn’t tell you what drew her to the member of the Boston Blazers. Maybe it was his quirky ways. Possibly it was a player with the last name of “Queener” that made the little girl smile wider than she had smiled in a while. No one really knows for sure, but something clicked between the two. From that day, she was his biggest fan.

Queener had a tough night that included a rough hit by Geoff Snider, who seemed to single him out for some reason. But even if he hit the ground, the little girl continued to cheer. 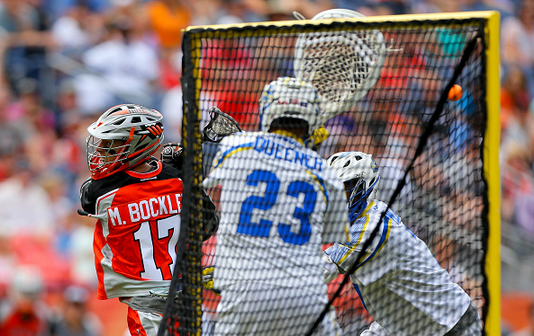 She followed him in Major League Lacrosse as well where she showed up at various games behind the visiting team’s benches and gave him what became their signature “thumbs up.” They always had some sort of picture taken to commemorate the event.

Queener created an entire All-Star team dance off when she was chosen to do a dance at halftime during the 2013 MLL All Star game in North Carolina. Greg Gurenlian joined in and so did many others. She won the contest much to the chagrin of the boys who were dancing as well.

She was thrilled when Queener was picked up by the Philadelphia Wings in an NLL dispersal draft and heartbroken when he never played for them.

She continued to see him each summer when she could and the photo collection grew. She was in Annapolis when he hurt his hand and had to come out. In a tremendous amount of pain, he still found a way to pinpoint her in the crowd and give her a weak “thumbs-up” before heading over to the trainer.

Queener would eventually move on from Major League Lacrosse just like he had from the National Lacrosse League. The little girl, now a teenager, thought she wouldn’t see him again. She was able to keep tabs on her favourite player, though, thanks to various media sites.

Fast forward to Christmas 2017. Queener contacted the girl’s father and asked if he could send a gift to the girl who believed she was his biggest fan. He sent her a Boston Blazers jersey, making not only her Christmas, but her entire year. He signed the jersey in Hamilton at the Heritage Cup game and personalized it just for her. And he didn’t know that doing so would keep her fighting spirit going. His message was simple: “To Allie, My #1 Fan Keep Being the Best! Your #1 fan, Brett Queener #23”.

Allie was having a rough time. She was born underweight and suffered from various diagnosed and undiagnosed medical conditions including failure to thrive, food refusal and various other issues. She almost died several times. Her parents took her to DuPont, CHOP, The Penn State Milton S. Hershey Pediatric Feeding Clinic and more. Countless tests, needles and doctors tried to figure out what was wrong. No one could.

At 15, Allie is the size of someone who is nine. She won’t get any bigger. She gets picked on and made fun of. Life is tough for her. But she makes the most of each day. Many thought she couldn’t or wouldn’t make it. The doctors couldn’t make any guarantees about the length or quality of her life. But they underestimated the little girl who kept surviving despite the odds.

And Allie must have known something the rest of the world didn’t. As soon as the Premier Lacrosse League was formed, she seemed to automatically know that Queener would be a goalie. She never wavered in her belief that he would make a team and play.

Allie was able to go to Washington, D.C. and see him play before an injury sidelined him. She saw his team win their first game. At the end of the game, with a hobble, he found her and they did their thumbs-up while taking a picture. She wore his jersey despite the heat.

From the Thriller All-Star dance, the chants in goal, and a guy playing the game he loves again, this girl has seen it all. It is players like Queener who reach out to their fans who inspire us all to be better because of the love of the game.