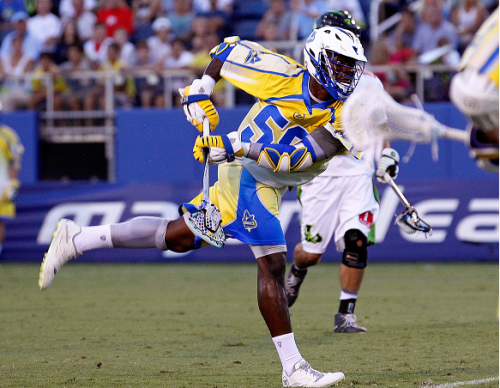 Jovan Miller is a name you didn’t hear all through the 2014 season. Miller started his career in Major League Lacrosse back in 2011 with Rochester, only seeing the field for 7 games and scoring 4 goals and 4 assists that season. The following season, Miller was picked up by the Charlotte Hounds. There he saw a lot more playing time, becoming a regular.

He played all 14 games of the season with the Hounds where he was able to score 13 goals, two two pointers and six assists. Miller proved to Charlotte that he wanted to be on their team and they kept him for the 2013 season. Yet again, Miller was back on the side lines only seeing 5 games.

Chesapeake picked the midfielder up 80th overall in the 2014 supplemental draft. Miller saw his first game in a Bayhawk uniform in the season opener, April of this year. He then began to get tossed around. He played 4 games for Chesapeake, sent to Ohio for 4 games and now holds a place the Florida Launch’s roster.

Question is, now what will Jovan Miller do for Florida?

Miller has a lot of potential, if you look back at his junior and senior year at Syracuse you would see it. We need to see that drive and skill again. Last night Florida wanted to see what benefits there are of having Miller on the team now.

Miller may have taken two trips to the penalty box, both for pushing Technical Fouls, but he was also able to get a hold of the ball making a nice two pointer for Florida. That goal was scored with 20 seconds left in the first quarter and helped Florida stay tied with New York.

I hope the drive and initiative Jovan Miller had against New York stays. If it does, he truly could be something great for Florida alongside Casey Powell, Kieran McArdle, and the rest of the young team.