Evan Kirk and Tyler Carlson have been reunited as a goaltending duo with the Saskatchewan Rush after Kirk came to the team during the offseason in a blockbuster trade with the New England Black Wolves.

Kirk and Carlson entered the National Lacrosse League as a goaltending tandem for the Minnesota Swarm in 2012. Kirk was the sixth-overall pick in the draft leading up to that season and highly touted; Carlson had just completed a successful career at Seneca College and was brought in as a free agent.

They split time in the Swarm net for two seasons before parting ways and have taken very different paths to their current residence in Saskatoon. 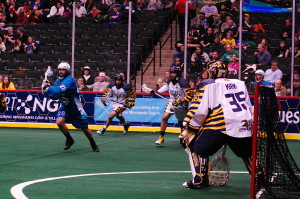 Kirk got off to a terrific start in his NLL career. While playing 415 minutes as a rookie, he posted a 9.81 goals against average and a .807 save percentage, both career bests to-date and both the best in the NLL in their respective categories. Kirk was named to the league’s All-Rookie Team as a result and looked to be developing into exactly the goalie Minnesota wanted when they took him in the first round of the draft.

His sophomore season was much less auspicious. A shaky start to the season yielded the lion’s share of the minutes to Carlson. Kirk would end the season having logged just 393 minutes, with a 14.47 GAA and a weak save percentage of just .734.

The ultimate result of his weak 2013 season was that the Swarm decided to ship Kirk to the Philadelphia Wings and take their chances with Carlson as their main guy.

His first season in Philly was a string rebound season. Now as the full-time goalie, he put in 817 minutes between the pipes and reduced his GAA to a more respectable 11.60, with a .766 save percentage. The Wings struggled however, winning just five games with Kirk in net.

When the Wings moved to New England and became the Black Wolves, their fortunes didn’t turn around overnight. Kirk’s performance backslid again as he finished the season at 13.55/.728.

Kirk’s 2016 season wold be his best overall. Guiding the Wolves to the postseason, he won nine games, posted a 11.79 GAA and .789 save percentage, and he won the Goaltender of the Year award, becoming just the third goalie since 2010 to do so (Matt Vinc won five times and Mike Poulin won once during that period).  Again, Kirk’s numbers came back down to Earth a bit in 2017, with his GAA jumping back up to 12.83, but it was otherwise a solid year.

Kirk now joins a Rush team that has been led by Aaron Bold for the last several seasons. Bold was runner-up for Goaltender of the Year several times, so expectations are very high that Kirk can come in and have another big year, as he seems to do in even-numbered seasons. 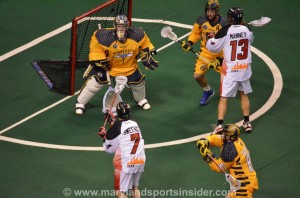 Carlson’s rookie season was not quite as spectacular as Kirk’s, but it was nevertheless pretty good. He played a few more minutes (498) and won five games to Kirk’s four. His GAA and save percentage were decent, at 12.04/.748, showing he was capable of playing at the NLL level in spite of not getting drafted.

Kirk’s poor performance in 2013 resulted in Carlson taking over the spotlight for the Swarm. As the primary goalie, Carlson racked up 570 minutes of playing time and his 11.04 GAA and .771 save percentage were strong improvements from his rookie numbers.

Confidence in Carlson as a legitimate No. 1 goalie resulted in Kirk getting moved. The Swarm wound up disappointed, however, as Carlson’s save percentage slumped badly, down to .727, although his 11.32 GAA wasn’t so bad. But the poor season made him expendable and he was moved to the Rush, at that point playing in Edmonton.

Carlson’s three seasons with the Rush have been strictly in a backup capacity to Bold. His numbers have not been great, but, in his defence, he has a 3-2 record in that time and he has earned a ring as part of the Rush’s 2016 Champion’s Cup squad.

So with Kirk and Carlson back together, it would appear at this point that the power dynamic has shifted once again, putting Kirk back in the top role, with Carlson playing the support role. If Kirk’s up-and-down history holds true again in 2018, he’s due for a tremendous season—playing behind Saskatchewan’s elite-level defence should help make that happen. If not, Carlson will once again be given the chance to step in and take over.

The Saskatchewan Rush open their season on the road, facing the Toronto Rock on December 16. Their home schedule gets underway the following weekend when they host Kirk’s former team, the New England Black Wolves, on December 23.