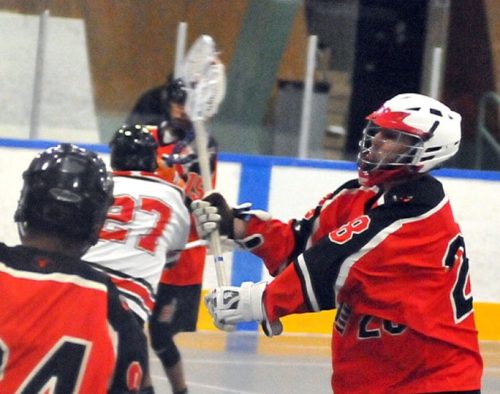 The 2016 WCSLA Championship kicked off with a matinee on the carpet as the Langley Warriors get set to host the Nanaimo Timbermen at the Langley Events Centre yesterday.

The best-of-five series will decide both the WCSLA champion and the team that will represent BC at the 2016 President’s Cup, which runs from Aug. 29 to Sept. 4.

Both teams earned the right to get to the finals with big semi-final wins over Ladner and North Shore. Despite finishing behind Langley and tied with Ladner for second in the standings, Nanaimo is the returning provincial champions and have fielded the most competitive roster outside out of Langley this season. The T-Men dumped the Pios in four games while the Warriors swept the Indians in three.

The series will arguably come down to who gets more timely performances in the cage. Langley signed NLL veteran Tye Belanger before the roster freeze and he has been quite good for the Warriors, posting a stellar 89.5 save percentage in three playoff games. Belanger has allowed just under four goals per game and will undoubtedly be one of the better goalies Nanaimo will come across if they are to head to Leduc at the end of August.

On the same token, if there is a group firing on all cylinders that is better than Nanaimo’s offensive unit, I’d like to know. The T-Men have balance on both sides of the ball, move the ball efficiently and can both inside and out against defences. They’re led by a strong group – Corey Shires, Andrew Miller and Jon Diplock have paced all Nanaimo scorers in their four playoff games. But they also have depth players who can put the ball in the net, such as Mitch Parker, Brendon Anger and Ryan Hanna, who have a combined 10 goals and 12 assists in their four playoff games.

Langley also boasts an impressive group of offensive players as Bryan Poole led players in scoring in the regular season while Derek Lowe was fourth. Along with Curt Callard, they have paced all Warriors in scoring in their three-game set with North Shore. But Nanaimo tendy Nick Patterson is playing well in his own right, stopping 83 per cent of shots faced in 242 playoff minutes. The veteran will be counted on to keep Nanaimo in games with strong performances in net all series.

Looming over the entire playoff series is the recovery of Timberman Shawn Swanson, who is still recovering from broken vertebrae in his neck after a nasty hit from behind by a Ladner player in their last playoff series. So far, over $20,000 has been contributed to help with his recovery efforts and no end to donations in sight. It’s a stark reminder that despite analyzing these games and players critically, players are still human underneath the mask. Lacrosse is a high-risk sport when it comes to violence, which I’m sure all players will be aware of as they take to the floor on Saturday and beyond.

If you were to ask me to pick a favourite in this series, it’d be Langley – after all, they only lost two games in the regular season and dispatched a pretty solid North Shore team in three games. With Belanger between the pipes, they are realistically the best bet for a BC team to win a few games at the President’s Cup, not just be happy to be there. However, Nanaimo is a battle-tested team who will be playing with intensity and a lot of emotion as they try to win one for their teammate. If Patterson is reliable between the pipes and Nanaimo can figure out how to score with some regularity on Belanger, an “upset” isn’t out of the question.

Here is the schedule for the series: