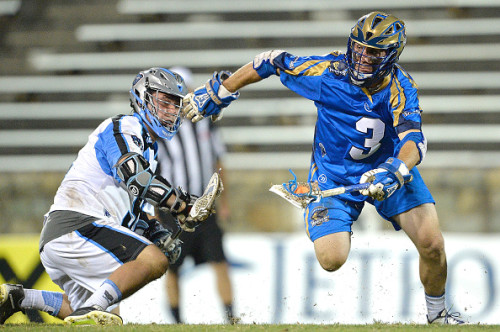 The second half of the season is about to begin and every team except for the Florida Launch is in the playoff hunt. In fact, the top six teams are within one game of each other! Heading into Week 12, we find a new No. 1 team in our rankings as the Charlotte Hounds find themselves in the top spot. Meanwhile, the Ohio Machine took quite a tumble down the rankings as they ride a three game losing streak into the stretch run. How do the rest of the rankings look as we head into Week 12? Take a look for yourself below:

1- Charlotte (6-3)- The new No. 1 team in the rankings swept the second game of their back-to-back with the Atlanta Blaze with a big overtime victory on the road. Mike Chanenchuk scored the game-tying and game-winning overtime goal to cap an eight point night. The Hounds will look to stretch their winning streak to four games as they take on a tough Rochester Rattlers squad. The Hounds will have to find other scoring options in order to break through a stingy Rattlers defense.

2- Chesapeake (6-4)- The Bayhawks rise all the way up the rankings to occupy the second spot after a very nice win over the New York Lizards. That gave them back-to-back wins against two of the top teams in the MLL heading into the break. Joe Walters has led the way combining for 13 points in the last two games. Meanwhile, Myles Jones continues to be a huge boost to the midfield as he has had seven combined points in the two wins as well. The Bayhawks take on the lowly Florida Launch and should continue their winning ways to start the second half of the season.

3- Rochester (5-4)- The Rattlers fall two spots in the rankings this week after falling to the Cannons. After two strong offensive efforts against the Outlaws and Machine, their offense was nowhere to be found in Week 11. Their defense was still stout giving up only 13 goals. After quickly emerging as a team to beat moving forward, the Rattlers all of a sudden find themselves one game away from falling to .500. Their second half doesn’t start with a cupcake as the Hounds come and visit Rochester for a marquee matchup.

4- New York (6-3)- The Lizards fell to the Bayhawks in Week 11 to go on their first losing streak of the season right before the break. The loss comes with a bit of an asterisk as faceoff stud and last year’s MVP award winner Greg Gurenlian did not play as he was battling injury. Therefore, it’ll be interesting to see how the Lizards bounce back against the Launch this weekend. It should be smooth sailing but the Lizards must improve their defense moving forward as they have four games remaining with playoff implications.

5- Ohio (6-5)- What has happened to the Machine? Three weeks ago, they seemed like the odds on favorites to win the MLL title. Now, they could miss the playoffs entirely! A Week 11 loss to the Chesapeake Bayhawks meant the Machine hit the all-star break on a three game losing streak. With three games to go, the Machine will have few chances to improve their place in the standings. This week’s game against the Boston Cannons could have important tie-breaking scenarios for the playoffs.

6- Boston (6-5)- The Cannons scored a very important 13-7 victory over the Rattlers in Week 11 and have put themselves on the right side of .500 heading into the playoff stretch. The Cannons put together the best defensive performance of the season and will look to continue it this week against a struggling Ohio Machine squad that has dropped three straight games. Boston doesn’t have many more opportunities to help itself out as it has three games left in the second half of the season so their game against the Machine is a vital one for their playoff chances.

7- Denver (4-6)- The Outlaws hit the all-star break riding a two game winning streak after defeating the lowly Launch 14-10. Denver had its best defensive game of the season as they allowed a season-low 10 goals. They will look to continue the momentum heading into the playoff stretch as they face the Atlanta Blaze who they lost to previously 23-12. Despite their poor first half, the Outlaws are right in the thick of the playoff race and could be a darkhorse to make some noise down the stretch.

8- Atlanta (3-6)- The Blaze lost a heartbreaker heading into the all-star break as they let up a game-tying goal to Mike Chanenchuk with 12 seconds to go in the game before Chanenchuk broke their hearts by scoring 43 seconds in overtime. The overtime loss to the Hounds was their second overtime loss of the season and brings their overall record to 1-3 in one goal games. However, with 5 games to go and the uncertainty of the league this season, the Blaze are certainly not out of the playoff race and will look to rebound against a resurging Outlaws team.

9- Florida (1-7)- The Launch continue their streak at the bottom of the rankings as they dropped their Week 11 matchup against the Outlaws 14-10. For a team with one of the worst defenses in the league, the 14 goals was a pleasant surprise, especially against one of the better offenses in the game. However, their offense continues to struggle. The Launch do get help as they face the Lizards’ sub-par defense but their defense will have their hands full against a strong Lizards offense.