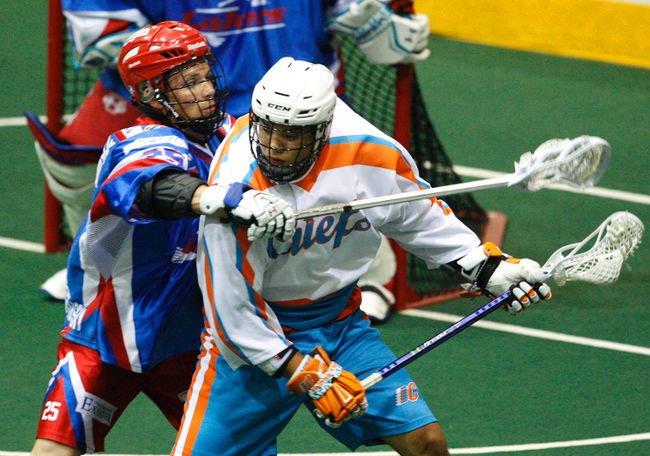 1. Turner Evans – Peterborough Lakers
While Turner Evans may have had a slow start to kick off his rookie MSL season, as the season progressed Evans quickly became the Lakers third option on the left side behind Cory Vitarelli and Adam Jones. Evans began to see significant power play time as the season moved along, contributing at a veteran-like pace on many evenings. While Evans finished tied for second in rookie scoring with Johnny Powless with 41 points, one could argue Evans had more value to the Lakers than Powless did to the star studded Six Nations Chiefs roster. Evans appeared in 17 games for the Lakers this regular season, scoring 11 goals while picking up 30 assists for 41 points.

2. Tyler Ferreira – Brampton Excelsiors
Another rookie who took the first half of the 2015 MSL season to adjust to the pro game. However a five game stretch around the midseason point is where 2015 first overall pick Tyler Ferreira broke out for the Excelsiors, recording 25 points in just five games. Ferreira would continue his hot streak over the next four games to close out the season, producing nine points in those four games. Ferreira is the go to guy on the left side of the Excelsiors offense and has proven capable of producing at an elite pace at the pro level, leading all rookies in scoring this season with 17 goals and 34 assists for 51 points, which was also good enough for ninth overall in MSL scoring.

3. Johnny Powless – Six Nations Chiefs
Considering Johnny Powless has been a part of back to back Mann Cup Championships with the Chiefs, many often forget that the 2015 MSL season was Powless’s rookie season in the league. A veteran of four NLL seasons, the transition from Junior “A” to the MSL was a seamless one for Powless who quietly went about his buisness, picking up 41 points in 15 games, to finish in a two way tie with Turner Evans for second in rookie scoring. Powless’s 12 goals and 29 assists placed him sixth in Chiefs scoring and 15th overall in the MSL.

4. Dan Lomas – Oakville Rock
Dan Lomas seemed to fly under the rookie radar at times this MSL regular season despite leading the Oakville Rock in scoring with 15 goals and 23 assists for 38 points in 17 games. Lomas has worked extremely well with Toronto Rock veteran Stephan LeBlanc on the Rock’s left side, consistently producing for the at times offensive starved Oakville Rock. Lomas, who is 2016 NLL draft eligible was held pointless on just two occasions this season, both games coming early in the season in losses to powerhouse Peterborough and Six Nations.

5. Derek Searle – Kitchener-Waterloo Kodiaks
The first defender to crack the list, Derek Searle was arguably the best defensive rookie throughout the MSL regular season. Playing a consistent game, Searle was able to lock down quality NLL offensive threats night in an night out. The 6-foot-3, 215 pound defender has until 2017 before he’ll hear his name called at the NLL draft, but should hear it called very early in that 2017 draft. In 15 appearances this season with the Kodiaks Searle recorded two goals and eight assists for 10 points, along with 25 penalty minutes, showing his ability to push the ball in transition, and play a physical, yet in control, defensive game.

6. Wesley Berg – Oakville Rock
Berg missed over half the season for the Oakville Rock, however in the seven games he did appear in, he showed MSL fans why he is such a highly sought after commodity in this year’s NLL draft. The righty out of Coquitlam, B.C picked up seven goals and five assists for 12 points in just seven appearances with the Rock this season, however he came through in the clutch picking up three key points in the Rock’s season finale win over the Brampton Excelsiors to slip into the playoffs. Had Berg played a full regular season schedule in 2015 he would have easily challenged for the top spot on this list; watch out for a big 2015 MSL playoff from Wes Berg.

7. Kyle Whitlow – Brooklin Redmen
While Whitlow did battle bouts of consistency through his MSL rookie season, he was still one of the most consistent Brooklin Redmen offensive threats throughout the regular season. It’s no secret the Redmen struggled offensively in 2015, but as mentioned, Whitlow was a bright spot, picking up 15 goals and 21 assists for 36 points in 18 appearances, which was good enough for third overall in Redmen scoring. Whitlow unlike most rookies got off to a hot start to his MSL career, picking up 12 points in his first three games, on three straight four point performances. Whitlow who is NLL draft eligible in 2016 should challenge to be a late first round pick in his draft year.

8. Reilly O’Connor – Brooklin Redmen
O’Connor came to the MSL ranks after three straight 100 point seasons with the Whitby Warriors, so expectations where sky high for the 6-foot-1 lefty from Whitby, Ontario. While O’Connor didn’t replicate that type of success for the Redmen this season, you saw flashes of brilliance after an early season slump. O’Connor is at his absolute best in possession of the ball, as he uses his tremendous vision and playmaking ability to excel. Not to knock the Redmen offense, but O’Connor would have likely excelled further playing with more elite level talent, as his vision and playmaking skills are that good. With 23 points in 12 games, expect O’Connor to have more of an impact during his NLL rookie season in 2016.

9. Connor Sellars – Brampton Excelsiors
Sellars may have flew under the radar this season, as many of the league’s top rookies are big name offensive players, however Connor Sellars play with the Brampton Excelsiors this season was not only consistent, but of high quality. A big 6-foot-3, 215 pound defender, Sellars is tenacious on the back end, consistently pressuring the ball, while also playing a smart physical game. A player who can run the floor, and play as a spark plug, Sellars has also showed flashes of offensive capabilities as he racked up four goals and seven assists for 11 points in 18 appearances.

10. Josh Currier – Peterborough Lakers
Currier may be an odd selection for the 10th and final spot on this list, as he didn’t blow anyone away offensively, and wasn’t really considered in the same breath as Berg, Powless, Evans and Ferreira. However Currier consistently played in a grinder-like role for the Peterborough Lakers. Acting as a spark plug on the Lakers offense, Currier was also able to produce when put in the position to, despite very few touches. In 11 games Currier picked up eight goals and three assists for 11 points in, as mentioned, a limited roll. Currier was excellent getting the big guns open, scooping loose balls and getting under the opponent’s skin. While the point total may not be there, Currier is well deserving for this place on this list.