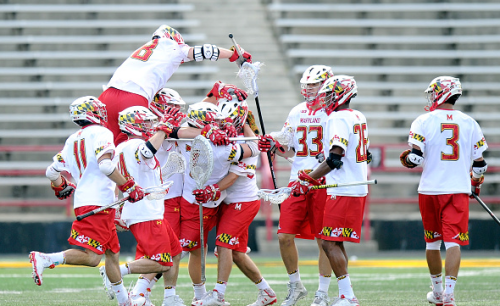 This is the second of my two part series of top plays from the 2015 NCAA College Lacrosse season.  In this edition, I take a look at top overall plays from the 2015 NCAA Men’s Lacrosse season.  These top plays can include goals (in fact many of them do include goals) but cover the entire game, from groundballs, to face-offs, to saves, and anywhere in-between.  The ten goals that we highlighted in Tuesday’s post are excluded from this list.

(Start at 0:15): What better way to start your NCAA Tournament run than winning the opening face-off and then going right down the field and scoring to give your team the very early advantage?  That’s what Trevor Baptiste did against Brown in their First Round game in Denver.  Brown was on the bubble the night of Selection Sunday and got in, but paid a price, as they would head to Denver to play the Pioneers.  The matchup was predicted to be one with a lot of offense.  And there was right from the get-go.  Denver got the 15-9 win and eventually their first National Championship.

These are all of Wardwell’s six saves against Bitter.  The two saves that I’m referring to are from the 13:52 and 13:48 marks in the 2nd quarter against the Heels (the entire sequence: https://youtu.be/QiK6eyoqBs0?t=45s).  In that sequence, Wardwell bailed out the Orange defense after Bitter got his rebound and got a shot off with three defenders on him, two of which were long poles.  He got a good shot off in the process but Wardwell played the best game of the season in the ACC Semifinal win, which eventually led to an ACC Championship over Duke.

T3. Notre Dame’s PJ Finley’s Tying Goal And Jack Near’s 2OT Winner Against Syracuse https://youtu.be/vqRa6RPeNt4?t=5m47s This was arguably the best game of the regular season.  Notre Dame had the lead for the majority of the game and looked like they were going to runaway with the game in the 3rd quarter.  But the then-top ranked Orange had other plans and took a one goal lead with 1:06 left in regulation and Ben Williams taking the next face-off against P.J. Finley.  Williams, dominating the majority of the game, lost to Finley, who then went down the field and scored low on Wardwell, his first collegiate shot and goal, with 59 ticks left in the game.  Fast-forward to 2OT, and a controversial call at the end line gave the Irish the ball.  Jack Near went coast-to-coast and gave the Orange their first loss of the season.  Two phenomenal plays by the Fighting Irish made them a National Champion favorite in late-March.

T2. Notre Dame’s Comeback Against North Carolina With 1:26 To Play https://youtu.be/ZgE1oIcvugM?t=4m53s Similar to the previous selection above, we really have three big plays in one selection.  It started out with the two-minute non-releasable call on Evan Connell for unsportsmanlike conduct.  That set the stage for captain clutch, Matt Kavanagh.  Down 14-12 with 1:27 left in the game, the junior from Chaminade scored the first man-up goal to cut the Tar Heel lead to one.  Sergio Perkovic capitalized next to tie the game up at 14 all.  Then with seven seconds to play, Kavanagh completed the comeback to send South Bend into a frenzy at Arlotta Stadium.  Huge credit should go out to Jim Marlatt in that entire sequence, as he assisted in all three of those goals.

1. Maryland’s Kyle Bernlohr’s Save With His Butt End Against Johns Hopkins

When I was watching this sequence live, I originally thought that Tinney’s shot hit the pipe and that Hopkins was inches away from sending the second semifinal of the day into overtime.  Then, we saw what actually happened.  Bernlohr with the unbelievable save with the butt end of his shaft to basically seal the victory for Maryland.  No wonder why Bernlohr was selected as a First Team All-American.