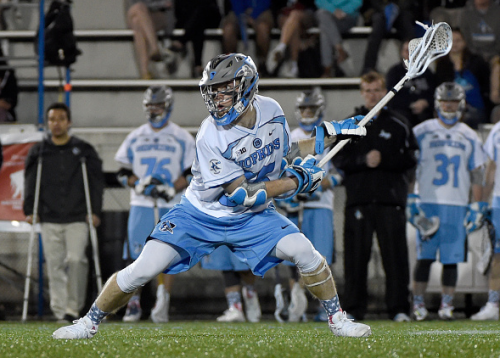 It’s the most storied rivalry in all of college lacrosse.  It’s the Michigan-Ohio State or the Duke-UNC of its sport.  It’s none other than Johns Hopkins-Syracuse, the two winningest programs in the history of college lacrosse.  Tomorrow at Navy Marine Corps Memorial Stadium, another chapter will be written into the already huge book between the two teams.

We’ll begin with what will be considered the “road” team due to seeding, which is Johns Hopkins.  Chances it won’t be a road game for the Blue Jays because campus is about 45 minutes away from Annapolis, so I wouldn’t be shocked to see a whole bunch of baby blue in the stands tomorrow afternoon (and also some red, yellow, and black for Maryland in the next game).  It’s a whole new Hopkins team, a different one than what we saw earlier in the season, which included a 13-10 loss to the Orange in the Carrier Dome.  The Stanwicks, Wellington and Shackleford, and Ryan Brown have become a dangerous force at attack.  Wells is the quarterback of the offense, but he isn’t he most dangerous attackman.  That belongs to Brown, who when open, he will take a shot that is hard to stop in the game today.  And he can go off too, he had eight goals against Maryland in their upset victory.  Then the midfielders of Holden Cattoni, Connor Reed, and freshman Joel Tinney have been the biggest improvement to this team.  They have finally found a way to create a very good team chemistry with each other to be a threat on the outside.  Goalie Eric Schneider seems to have found his poise and has been very consistent in his last five games.  He can also fire up the team whenever he makes a big stop and can help turn momentum into the Blue Jays’ favor.  The most interesting battle will be at face offs.  Drew Kennedy and Hunter Moreland couldn’t solve Ben Williams for the most part in their first meeting.  Moreland, who will more than likely take most of the face offs tomorrow, was 1-for-7 against Williams.  If Moreland can stay with Williams, Hopkins has a chance to pull off another upset.

On the other side, many people have favored the to win the NCAA Championship.  And there are multiple reasons why they are picked as favorites.  Let’s start with the attack, and probably the best in the nation.  Randy Staats was a huge factor in their first meeting, scoring four goals against the Jays.  He can make spectacular plays when needed for the team, which has helped them a lot when he’s in.  Next is Dylan Donahue, the leader in the nation in man up goals with 15 (Cattoni is third with 11).  Donahue can be described as 1B in the Syracuse unit, with the next man.  Kevin Rice is a Tewaaraton finalist and the most decorated Syracuse lacrosse athlete on and off the field.  His IQ is one of the best in the game, and he’s not afraid to share the ball around.  Next comes the plentiful midfielders, which is mainly two units, but coach John Desko has also used his third unit at times.  Nicky Galasso has played his best lacrosse ever since being injured the past two seasons.  Imagine if he wasn’t injured…wow.  Henry Schoonmaker and Hakeem Lecky also contribute to the offense and use the advantage of being defended by a short stick very well.  I’m not sure who Hopkins will put a pole on tomorrow, but it will be interesting.  The second unit of Jordan Evans, Nick Weston, and Tim Barber has also been huge to the team.  Evans scored a career high five goals last week against Marist, and showed that he is deserving of the #22 jersey.  I would like to see if he can put up three more similar performances during this tournament run.  Tim Barber played some attack while Randy Staats was injured during the season, and the OCC transfer has been a wonderful addition to the team.  You might not see the third unit of Matt Lane, Derek DeJoe, and Ryan Simmons tomorrow, but they can also do some damage.  Missing from the list is Sergio Salcido, who did not travel with the team due to a sickness.

And we haven’t gotten to the defense yet!  Brandon Mullins, Sean Young, and Jay McDermott have helped goalie Bobby Wardwell immensely during the past season, but have been a little sloppy late off-ball and with communicating.  Hopkins made Virginia pay last week with those same mistakes, which was emphasized this week during film sessions.  Wardwell has been consistent in the net for the most part this season, but needs to work on his lower corners a lot.  Finally, maybe the MVP of this team is Ben Williams.  The FOGO has been a blessing for coach Kevin Donahue who works with FOGOs, as face offs have been a huge problem on the hill for a good amount of time.  With that problem solved, many Orange fans started making Memorial Day weekend plans for Philadelphia.

I’m going to Philly win or lose since I live there, but I’m hoping that the Orange win.  I think it will be a very close game yet again and I think Hopkins will scare the Orange a lot more than they did the first meeting.  The Blue Jays jumped out to a 5-1 lead before the Orange scored seven unanswered in the first and second quarters.  The second half was more balanced, with Hopkins tying the game up at 10 in the 4th quarter, until a three goal run by the Orange sealed the deal.  Hopkins will be out for revenge for sure, but the seniors on Cuse want to get back to Championship Weekend and win it all in their final time playing for their university.  Pick: Syracuse.