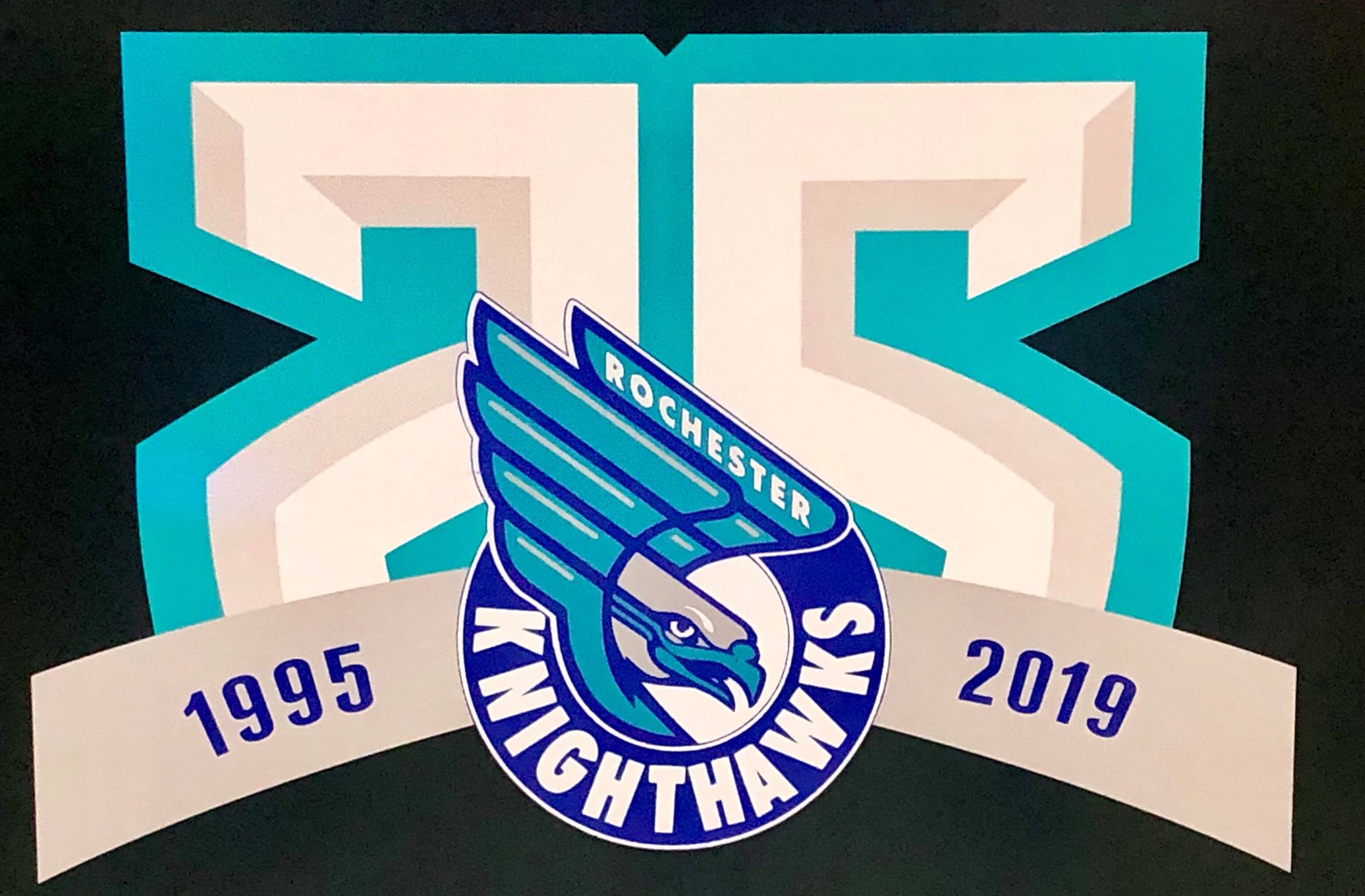 In the final game of the 25th anniversary season of the Rochester Knighthawks, and the final game before the franchise moves to Halifax, the New England Black Wolves (9-9) defeated Rochester 14-12 in front of 6,158 loyal fans at Blue Cross Arena.

Prior to the start of the game, end of season awards were handed out.

The game did not start the way the Knighthawks and their fans wanted. Tyler Digby and Colton Watkinson scored 28 seconds apart to open up a quick two-goal lead. Callum Crawford would score his first of the night off a feed from Stephan LeBlanc, getting the shot under the arm of goalie Warren Hill to increase the lead.

The final goal of the quarter came off the stick of Black Wolves’ goalie Doug Jamieson. Rochester had pulled their goalie for an extra attacker to try and get the offense going, and Jamieson cleanly stopped a shot by Austin Shanks and lofted the ball high in the air that would land under the crossbar on the second bounce at 10:35. New England’s defense was very stingy allowing Rochester a very limited amount of second chances.

The second quarter began the same as the first as David Brock would force a turnover and go in all alone and beat Warren Hill in the first minute. Crawford followed that up with his second on the night, both goals coming on the power play as he would sneak behind the defense and take a pass from Leblanc and quick stick the shot for a 6-0 lead. Rochester would finally get on the board after 17:28 of playing time as Chris Boushy rolled off an Adam Bomberry check and fired his shot passed Jamieson. Crawford closed out the period with two more goals, the first of which marked the end of the night for Hill. Crawford greeted Goodleaf with his fourth of the night at 10:35 as he would jump across the crease and find rope to the left of the goalie.

Rochester came out firing in the third as Kyle Jackson would get his lone goal of the night off a double screen and beat Jamieson. Nine seconds later Jake Withers won the face-off and fought off three defenders to reduce the lead to three. Austin Shanks would score on the power play, taking a one-handed pass from Benesch to cut the ‘Wolves lead in half.

New England responded with a three-goal run that began with Crawford’s fifth, this one on a penalty shot as Graeme Hossack was called for illegal substitution on a breakaway attempt. Joe Resetarits and LeBlanc brought the lead back to seven.

Rochester outscored New England 3-1 in the last four minutes of the quarter, the last goal coming with just one second left. After forcing an eight-second violation Boushy was checked to his knees but still put Ryan Benesch’s pass past Jamieson to make the score 12-7.

Cody Jamieson would start the fourth quarter with his lone goal of the night. It was Jamieson’s 255th career goal and the last for the team he’s played his whole career with.

“I have never really told anybody this, but I have always wanted to be in Rochester,” Jamieson said in a team press release. “When my best friend Sid [Smith] was draft eligible the year before, I had one more year left at school, and it was tough to stay.”

Crawford’s seventh of the game came with five minutes remaining to put a lid on the game. Benesch collected his fourth of the night 17 seconds later with one of the assists going to Austin Shanks for his 99th career point. Shanks also got his 100th career point and the last goal of this chapter of the Knighthawks’ franchise.

Rochester head coach Mike Hasen noted that although he has experienced ups and downs in Rochester, the fans and the city will always hold a special place in his heart.

“It has been a rollercoaster ride, my kids have grown up here,” he said. “Through it all, I have only ever wanted to be a Knighthawk.”

“I could not imagine playing for somebody else,” he said. “I am thankful to have been here for as long as I have. We had a lot of good times.”

Next year the franchise will be relocated to Halifax, Nova Scotia and be known as the Halifax Thunderbirds. But don’t worry Knighthawks’ fans, you will have a new team next season owned by Kim & Terry Pegula and all indications are showing the name will still be the Knighthawks.

Prior to the game Tim Knab (Knabber to most of us) was acknowledged as the All-Time Fan in Knighthawks’ history.

In the 25-year history of the Rochester Knighthawks: