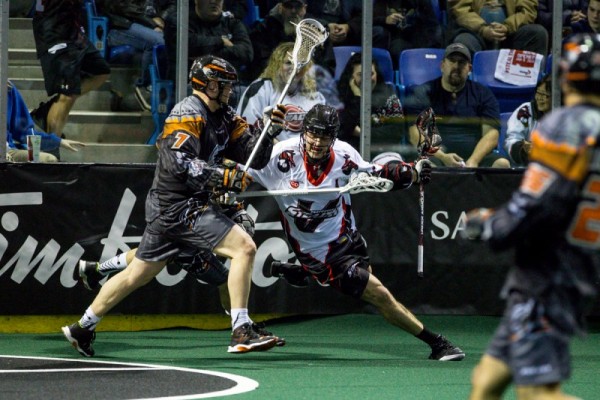 It took the full 18 weeks but the NLL’s playoff picture is finally set. There were four games on the schedule Saturday night – two “meaningless” games and two for all the marbles. Lacrosse game, as we know, are never actually meaningless; we use the term to indicate the impact on the standings only.

In the east, things worked out as they appeared they would most of the season. The Georgia Swarm clinched first overall, the Toronto Rock took second and the New England Black Wolves third.

For the first time in NLL history, the Rochester Knighthawks and Buffalo Bandits will both miss the playoffs. The Bandits were eliminated last week but the Knighthawks had a chance to make it. They needed to win both their weekend games against the Swarm and count on a loss from one of the other teams.

However, the Hawks lost to Georgia Friday making Saturday’s game, which they won 9-8, irrelevant. Angus Goodleaf played just his second complete game of the season as the Hawks gave Matt Vinc the night off. The Swarm rested Miles Thompson, Randy Staats and Johnny Powless

Lyle Thompson, however, did play, and finished as the NLL’s regular season scoring champ with 45 goals and 71 assists for 116 points.

The Vancouver Stealth defeated New England 17-16 in overtime. Home-floor was on the line for both teams and it was an emotional back and forth affair. Vancouver’s four goal run to start the fourth quarter put them up 15-10 but New England scored six straight to take the lead back. Corey Small popped both the tying goal with 18 seconds left as well as the winner 6:07 into a desperate overtime. Tye Belanger made an incredible 66 saves in the game. The Wolves had moments of shaky goaltending, with Evan Kirk lifted 4:26 in after allowing three goals on four shots. Doug Jamieson allowed 12 goals into the fourth and was replaced with Kirk after Vancouver’s five goal run.

The west is now set, with the Stealth hosting the Colorado Mammoth in round one, which consists of a single-elimination game on Saturday, May 6 at 7 p.m. PDT. The Saskatchewan Rush finished first and have a bye through the first round. The Calgary Roughnecks will miss the playoffs.

The Rock stole back second place with not only the Wolves loss, but with their own 19-15 win over the Bandits. As fierce rivals, the Bandits would have loved to have played spoiler at the KeyBank Centre on Fan Appreciation night but the Rock scored seven straight unanswered goals in the fourth quarter.

Rock fans had been wanting to see Miller in goal for a while as the Rock navigated a four game losing skid. Miller’s a proven big-game goaltender so it was no surprise to see him get the win. But now the Rock coaching staff has a big decision to make regarding their starter for next week, when they host the Black Wolves in the east’s semi-final at the Air Canada Centre, also on May 6 at 7 p.m. EDT.

One positive for the Bandits was Mark Steenhuis’ two assists, which put him at 1000 career points; he’s just the ninth player in league history to reach that milestone. Ryan Benesch had an impressive four goals and four assists in the game. Anthony Cosmo played the whole game for the Bandits; likely his last as he looks towards retirement.

Vancouver grabbing second place out west is surprising. They toiled in fourth for much of the season, going back and forth with the Roughnecks. Their five game losing skid early in the season was concerning, but the offensive trio of Corey Small, Rhys Duch and Logan Schuss proved to be one of the league’s most effective units. Corey Small has to have serious MVP consideration for his 111 points, that tied the team’s single-season record, on such an up-and-down team.

In the league’s last game of the night, and the regular season, the Roughnecks defeated the defending champion Rush 14-7. Curtis Dickson had a hat-trick and Frankie Scigliano made 53 saves. Saskatchewan had a full lineup but switched out Aaron Bold for Tyler Carlson at halftime.