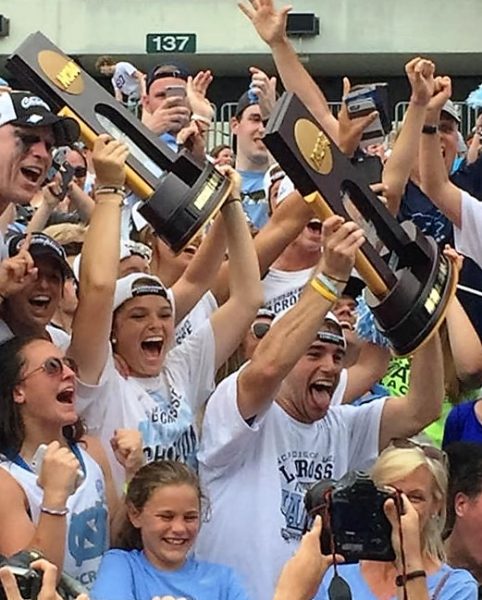 This game started typical UNC/Maryland. The Tar Heels came out with four goals in the first 4:10, but then the Terps came back with a vengeance. Scoring four of their own with two of them coming from Dylan Maltz.

The defense on both sides seemed to be invisible the first quarter as a total of 11 goals were scored.

The second quarter seemed to start off the same way with North Carolina scoring first, then Maryland coming back with three straight of their own and we went into the half 8-7 Maryland.

We entered the final stanza knotted at 10 apiece. Colin Heacock would score the first of his two while Steve Pontrello would keep Carolina within one. Luke Goldstock and Patrick Kelly would score goals and the last 3:22 would go scoreless and we would head to overtime, but not before a one minute penalty for unsportsmanlike on Luke Goldstock.

Maryland would start OT on the man up, but Brian Balkam would come up HUGE! Carolina would pick up the ground ball and call time-out setting up Chris Cloutier with his fifth goal of the day sending the Tar Heels to their National Championship. Twenty-Four hours earlier the North Carolina Women won their title, also beating Maryland.

Chris Cloutier was named the tournament Most Outstanding Player.