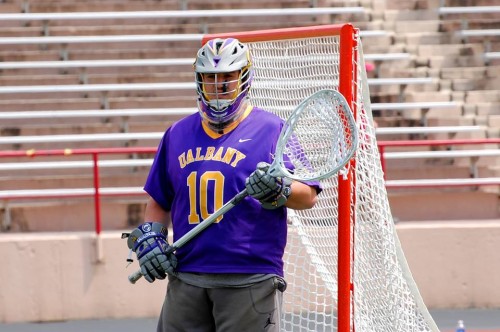 Team USA only has one current college star on its roster and that player is Albany goalie Blaze Riorden. Blaze is going into his fourth year as a starting goalie for the Great Danes and the Fairport native has played a huge part in taking his team to the NCAA tournament the past three springs.

This past summer was his third as a member of the Junior B Akwesasne Indians where Blaze is not stopping goals, but instead scoring them as a forward. Between both regular season and playoffs, Blaze has scored 98 points as shown on pointstreak.com with 56 of those coming during the playoffs.  He was just named to Team USA after helping the Indians win the Ontario finals and a birth in the Founders Cup.

The Indians ended up winning the Founder’s Cup that makes them the National Junior B champs.  While this past spring Blaze became known for his unforgettable highlight goal in the playoffs vs. Cornell, running it all the way up the field as a goalie, but many forget that was just his second goal as a Great Dane. In his sophomore season Blaze scored while playing man-up and has three colligate points going into his senior season. Blaze is not just a field goalie but also a lacrosse player that can do many different things and also one hell of a box player.