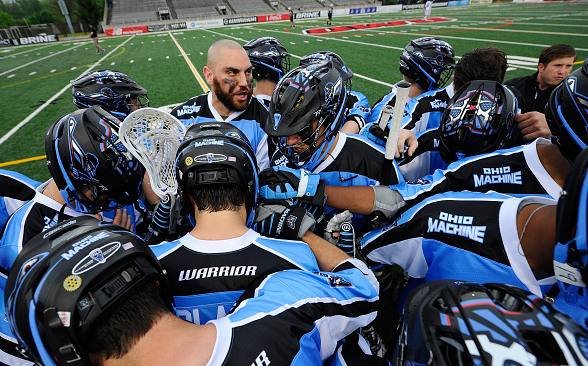 The Ohio Machine defeated the Denver Outlaws 14-13 this past weekend on the strength of 3 critical saves by Scott Rodgers during overtime.  Denver defeated visiting Ohio two weeks ago in the last minutes of that game so the Machine returned the favor in the rematch.  This time it was Marcus Holman scoring the game winning goal on an assist from Steele Stanwick.  This season’s games between Denver and Ohio has been some the most entertaining so far and we may be looking at two of the teams in the post season. Double digit scoring by both teams, games coming down to the last minute or overtime and some incredible individual performances have highlighted both matchups.

Jimmy Bitter started the scoring just under three minutes into the game for Ohio and then both teams traded goals until the end of the first when Drew Snider gave the Outlaws the lead.  The second quarter saw goal trading continue as the Denver took a 6-5 lead into the locker room.  SSDM Dominque Alexander helped keep it a one goal game as he took a Steele Stanwick assist.  The third quarter highlighted Peter Baum and Michael Bocklet show as they were responsible for 5 of the 6 goals scored.  The final quarter began with Denver leading 9-8.  Denver and Ohio opened the fourth by trading goals, then the Machine reeled off 3 goals and took the lead.  Drew Snider ended the Machine’s run as he took a Michael Bocklet pass and scored.  Kyle Harrison scored for Ohio as the Machine looked to win in regulation.  Drew Snider and Jeremy Sieverts scored the last two goals in the fourth to tie the game and send it to overtime.

Before Holman scored the game winner.  Rodgers was named the starter after Ohio traded to get him back, but a preseason injury sidelined him.  Adam Fullerton started both games while Rodgers was recovering.  Despite making only one save in the both the second and third quarters and a save percentage under fifty percent, Rodgers’ overtime game saves sparked the Machine when the needed it most.  Rodgers starting in goal was just what the Machine needed as they avoided the late game malaise that afflicted them last week.  His fiery performance was inspirational and sparked his teammates and helped secure a win.  This game will be one of the critical points in the Machine’s season as they seek to capture a Steinfeld Cup.

Marcus Holman led Ohio with 5 goals, Peter Baum scored 3 and Jimmy Bitter added 2 goals.  Ohio and Denver split the face off battle evenly as Greg Puskuldjian and Dylan Levings matched Brent Hiken at the X.  Denver was led by Drew Snider with 4 goals, Michael Bocklet and Gregory Melaugh had 3 each and Jeremy Sieverts scored 2 goals.  The intensity and physicality of this game was reflected in fourteen more penalties than the previous meeting.  Ohio scored twice on man up opportunities while Denver could only manage one goal on nine opportunities.  Denver falls to 1-1 and travels to Atlanta next week while Ohio goes 2-1 and hosts the defending champion New York Lizards in what could be a preview of the post season.