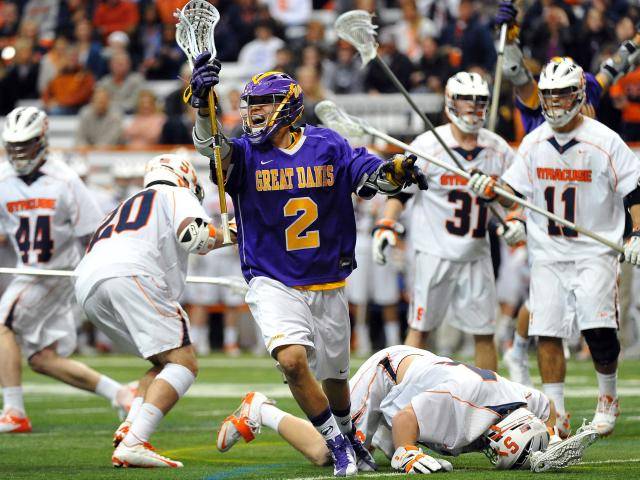 What an excellent weekend. While there were a lot of great moments including a nice hidden ball trick goal from Hopkins, for me, the best had to have been watching Albany’s Blaze Riorden make a very nice save before trucking down the field and putting away a goal. Although I picked Albany to win, I did not expect the Great Danes’ defense to show up like it did. If the Danes continue to play like that then this is a final four team.

How about them Buckeyes? Six goals from David Planning? 15 saves from Tom Carey? Wow, I did not expect the Dukies to go down like that. This will be the first time that a Duke team led by Coach Danowski will not make Championship Weekend; quite a streak.

To be honest, I almost fell asleep during the Maryland-Yale matchup; not a whole lot of offense. There was some controversy at the end of the game however. Yale’s Michael Keasey took an outside shot with about 22 seconds remaining in the game and the Bulldogs down by one. Watching it live, I thought the ball hit the pipe and ricocheted out. Upon further review it appears that the ball went off the crossbar, bounced inside the goal, and due to backspin came back out of the net. Was it a goal? Probably. But what is forgotten is that the refs made a horrible call to give the ball to Yale in the first place. Just prior Yale sent a shot sailing out of bounds and Maryland appeared to clearly win the race to the endline. The referees saw it differently and awarded the possession to Yale. I have seen so many blown calls on those races to the endlines this season, and almost all of them have been nearly deciding factors late in games. Part of the problem is that it’s hard for the referees to tell which player wins because of how the angles work out. Either way, something needs to be done because I think it has become a real problem.

In another game plagued by poor calls, the Notre Dame Fighting Irish barely squeaked by Towson. Suddenly I am worried about Notre Dame. I think the number one seed could actually fall in the second round, especially if Albany’s defense holds up next weekend. I’ve never been very confident in the Great Danes defensive grouping, but I thought they played very well against Cornell. The biggest surprise might have been Notre Dame’s stud attackmen Mikey Wynne AND Tewaaraton Trophy Finalist Matt Kavanagh being held without a point. I cannot imagine these two have back-to-back pointless games, but without these two guys bouncing back I don’t think the Irish have a chance.

The weekend finished off with Syracuse and Marist. Syracuse fans had the memory of last year’s first round loss to Bryant at the forefront of their minds, but those thoughts were quickly put to rest after the Orange got out to a 10-1 lead. With the exception of a four-goal run from Marist beginning in the second quarter, SU dominated this matchup from start to finish. Starting in the middle of the third quarter, Syracuse went on a 10-1 run, holding Marist to just the single goal in 19:40 of play. The big news coming out of that game was the play of Jordan Evans. The sophomore who wears the legendary #22, erupted for five goals on Sunday, more than doubling his season total. Right behind Evans was none other than Kevin Rice with four goals and five assists. Only two other players in Syracuse history have ever scored more points than Rice in a single Tournament game. The Orange will play Johns Hopkins next week in the quarterfinals. Every game between these two longtime rivals is must watch television, but after the outpouring of offense against Virginia from what was at one point this season a team that looked dead in the water, this could be a historically great match.

Speaking of the Hop, this team had everything going right on Sunday. Ryan Brown had the offensive game that he needed to have, picking up four goals and two assists. He was one of three Hopkins players to record 3+ goals. In net, Eric Schneider looked fantastic with 14 saves and five goals against. I said in the preview that it all came down to goaltending for the Jays, and Schneider certainly showed up. On the other side, I have no idea what happened. I have been talking up Matt Barrett for weeks now, and I still think the ACC Goalie of the Year is a phenomenal player, but zero saves? Zero saves. Come on, you can’t allow 16 goals and make zero saves. I was actually puzzled that he didn’t get pulled earlier. Forget the scoring deficit, 16 goals against in 37 minutes just takes your team out of it mentally. As for that UVA offense, it didn’t look like they made it to the field. Virginia put up just two goals in the first half in an embarrassing affair.

If I had to characterize this year in college lacrosse, I would say it is a year dominated by offense and more specifically, the year of the attackman. In the first round, the average number of goals scored per team was 12.63 which would rank tenth in scoring offense of all division I teams. There were four teams that scored at least 19 goals in the first round and only two of the eight winning teams scored fewer than 15 goals; that is insane. Just look at the quarterfinal teams this season. Obviously there is Albany with Connor Fields and Lyle Thompson, but then you have UNC, Syracuse, and Denver all with multiple players who could win the Tewaaraton in any year that a Thompson wasn’t up for it. Even Notre Dame and Hopkins have multiple attackman with very good resumes. That is why I think Maryland and Ohio State could be in real trouble. The Terps have the number one scoring defense in the country, but both teams lack that prolific offense which is a staple on most of these other teams. It will be all run and gun this weekend so get ready.