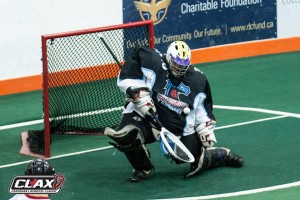 Loads of action in the Canadian Lacrosse League (CLax) this past weekend as five teams hit the floor which included a pair of victories by the unbeaten Ohsweken Demons and the Barrie Blizzard’s first victory of 2014. Here are the In Lacrosse We Trust CLax Three Stars of Week Five.

Third Star—Chris Attwood—Ohsweken Demons:
The CLax league leading scorer Chris Attwood once again helped lead the Ohsweken Demons to a pair of victories as he tallied 11 points (6 G, 5 A) in two games over the past weekend. The 2012 CLax Most Outstanding Player now has 20 goals and 20 assists for 40 points in six games.

Second Star—Dave DiRuscio—Niagara Lock Monsters:
Despite being charged a loss, rookie netminder Dave DiRuscio was lights out this weekend making an outstanding 59 saves while holding the potent offense of the Demons to just five goals in the second half. DiRuscio has been stellar in his rookie campaign and may have solidified himself as the Lock Monsters starting goaltender moving forward.

First Star—Travis Gibbons—Barrie Blizzard:
Travis Gibbons made a great first impression with his new squad, netting four goals and seven assists for an incredible 11 points en route to helping the Barrie Blizzard capture their first win since March 17 of last year. The Owen Sound, ON native would clinch the victory for Barrie with an overtime goal.

For all your Canadian Lacrosse League news, scores and updates, check back to ILWT for the best CLax coverage!