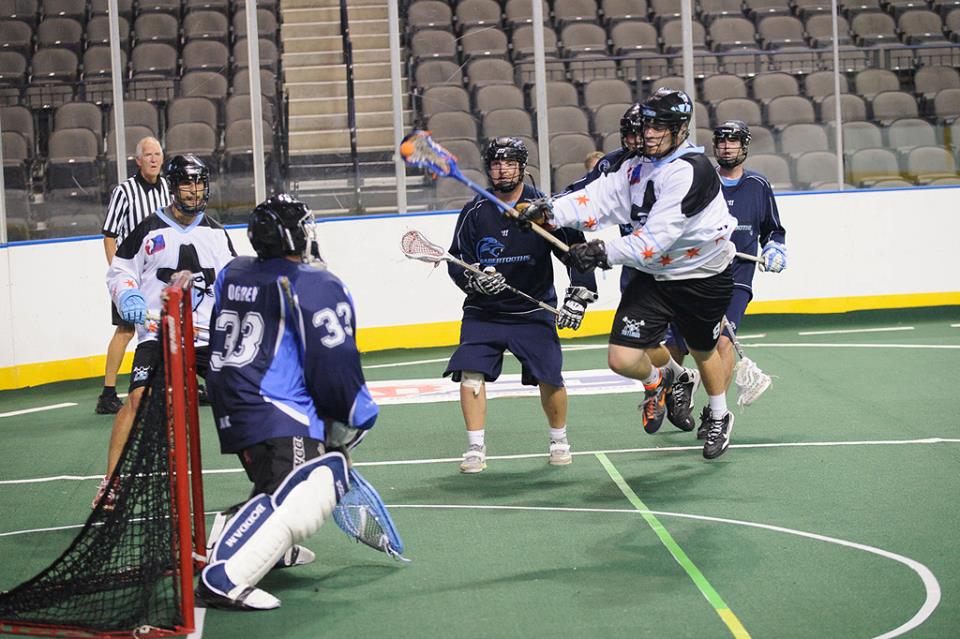 Before the MLL all star game, only real, diehard, obsessive fans of minor indoor lacrosse knew who Zack Dorn was (so, the readers of this site pretty much). Now Dorn has risen to lacrosse stardom from winning the hardest shot contest with MLL.

“It’s different, that’s for sure,” Dorn said of the attention he is getting. “I’ve been playing out in Vail for the past week with my buddies and its crazy that I have people coming up to me and recognizing me and saying congrats. The first day I got to Vail, my buddy Ryan Knautz and I went to watch a high school game. At one point one of the coaches came up to me and was like, “you’re Zack Dorn right?” and the whole team turned around and was saying congrats to me. The team was a travel team from Nebraska which just made it even cooler.”

Dorn is from Illinois where he works at the Lax Shop and plays for the Chicago Outlaws of the Continental Indoor Lacrosse League. The semi-pro box league is going into its fourth year and the Outlaws have been in the race each season.
“This whole year has been really awesome for me and lacrosse,” he said. “Vail was a really fun time, just to go out there, not to mention beautiful. CILL is a great league and I am super excited to see our team play this year, hopefully win it all for the first time. The Fann cup, I’ve never experience so I am pumped to be a part of it even though I’m not playing.”
Hitting 118 on the radar, Dorn shattered the record of Major League Lacrosse players Mike Sawyer and Mike Manley, who was on pace to win the contest this year before Dorn stepped on the field. Imagine the goalies who have to face him in the CILL?
“The only places it has been clocked is at The Lax Shop or like a Fastest Shot Competition. In a game I don’t take too many outside shots, it’s all inside.”
We asked Dorn who had the hardest shots of anyone he ever played with, and he gave his Outlaws some love as well.
“Two players come to mind: played with Steven Brooks and he can definitely bring the ball. The other guy is Ryan Shahidepour, he plays on the Outlaws too. He’s a transition player that has a lefty cannon.”
Making an impression on national television, there is almost no doubt the Outlaws will be getting more looks and maybe be taken more seriously for its players. In fact, two former CILL players, Cam Holding and Chris Cudmore, played in the CILL with Grand Rapids. Is Dorn next?
“I have not recieved anything from any of the pro teams. I feel like that is the next step, to prove that my game isn’t all just a hard shot and I can bring a lot more to the table. Hopefully someday I will make it to the pros.”
Now that Dorn is lacrosse-famous, he is enjoying the summer at the Vail Lacrosse tournament and next he will be a referee at the Fann Cup in Chicago.
“I’m just glad that I am able to reach out and give people inspiration. Hearing from kids saying that I inspired them to play or get better is awesome. Also, when these kids are from smaller lacrosse communities around the country is awesome. Having them know that just ’cause where you are from doesn’t keep you from reaching where you wanna go. I want those kids from Nebraska that I watched to go out and achieve something great and that applies for every single lacrosse player out there. When I coached for Cary-Grove, my high school, I always told the kids “Have fun, play lax,” and that’s how I personally have always played. So as far as the “fame” goes I am more pumped that I am reaching all these lacrosse players and putting my own personal stamp in lacrosse history.”