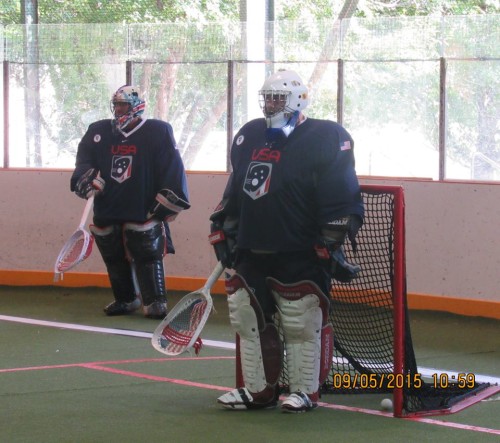 The host team Iroquois Nationals will make their tournament debut against an offensively loaded Team USA tonight at 8:30PM at the War Memorial in Syracuse. The Nationals are headlined by the world renowned Thompson Brothers, Lyle, Miles, Jeremey, and Hiana. USA looks to try to open the tournament with a win also, with strong offensive power from the likes of Casey Powell, Garrett Thul, and 2015 MSL MVP Joe Resetarits.
Iroquois will have Rich Kilgour behind the bench as head coach. In previous seasons as head coach with the Six Nations Chiefs, Kilgour guided the Chiefs to back to back Mann Cup championships in 2013 and 2014. Most recently his Chiefs reached the 2015 MSL finals where they eventually lost to Peterborough. Other notable assistant coaches include his brother Darris Kilgour (winningest coach in NLL history), and Duane Jacobs (former assistant with the Buffalo Bandits). Between the pipes the Nationals will have two NLL Championship winning goaltenders in Mike Thompson (Buffalo 2008) and Angus Goodleaf (Rochester 2012,2013,2014).
USA will look to avenge the loss it took last time these two faced off in WILC competition, which was in 2011 where Iroquois narrowly beat USA in an 11-10 decision. A new face will head the bench in former Philadelphia Wings head coach Tony Resch. As before, USA will see the return of American box legend Casey Powell, and future American box legends in Joe Resetarits and Joe Walters who both have extensive NLL and CLA experience. USA will see the return of two of its goalies from previous years with Jake Henhawk and Chris Collins, but welcome newcomer Dave Mather who has seen ample box play in the BCJALL and WLA. Goaltending still appears to be a weakness for this USA team, a weakness the Iroquois very well could capitalize on.