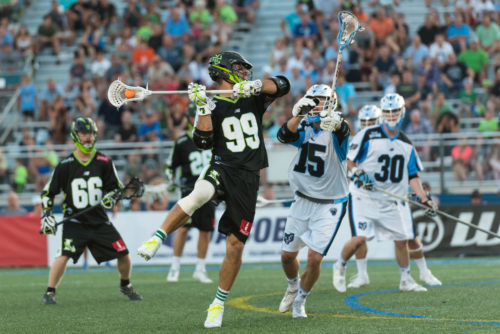 Ask any sports league how they’d like their final standings, and practically everyone would say the same thing. They would want the majority of the teams to be competitive and with a chance for the postseason down the stretch.

The 2016 Major League Lacrosse season took that notion to an extreme.

Incredibly, seven of the league’s nine teams finished the regular season with identical 8-6 records. Only problem is, there was only room for four in the playoffs. Just think, Rochester, Chesapeake and Boston all finished their seasons tied for first, but missed out on the postseason.

Despite the heartbreak of some teams missing out on tiebreakers, the regular season was extremely positive for the league. Seventy eight percent of its teams were alive for the postseason until the final day. The first playoff spot wasn’t clinched until Saturday around 7:15 p.m. ET when Boston’s win over Florida clinched spots for Denver and New York. Ohio went on to beat the Lizards to clinch a postseason berth, and Charlotte defeated Chesapeake to earn a spot.

In the end, there is benefit to having one (or a few) dominant teams to market the sport, but especially in a sport like lacrosse, parity is a sign of growth. You see it at all levels of lacrosse. In the college game, more and more “smaller” schools are having success on the national level, and sending players to the pro ranks. At one time, there was such a gap between certain levels of players, but that gap is noticeably shrinking. Whether it’s seven teams finishing tied for first in Major League Lacrosse, or a team like Brown University making the Final Four in the college ranks, the sport is undoubtedly growing.

How tight was this Major League Lacrosse season? The league had a heck of a time in breaking the seven-way tie. Just to figure out who finished in first place, they needed to go down multiple levels of tiebreakers. After comparing records against all other teams involved in the tie, Ohio and Denver were still tied for first. To break that tie, they moved to head-to-head (which was a split) and then went to goal differential in those games (which for both, was zero). Finally, the next tiebreaker was point differential for the season, which Ohio captured (at plus 19), meaning the Machine took first place.

How tight was the Major League Lacrosse season? Rochester had the highest point differential for the year and defeated first-place Ohio twice, but missed the playoffs. The Rattlers can look back to the heartbreaking loss at Boston on May 14 – when Brodie Merrill tied the score with a full-field two-point goal as time expired – and wonder “what if?” Every team will have a game they can look back to and wonder the possibilities. That’s the beauty of Major League Lacrosse; every game means so much.

The sport will continue to grow heading into the postseason, with semifinal games in Minnesota and Connecticut next weekend. If the playoffs are anything close to what we saw in the regular season, we’re in for an exciting ride.