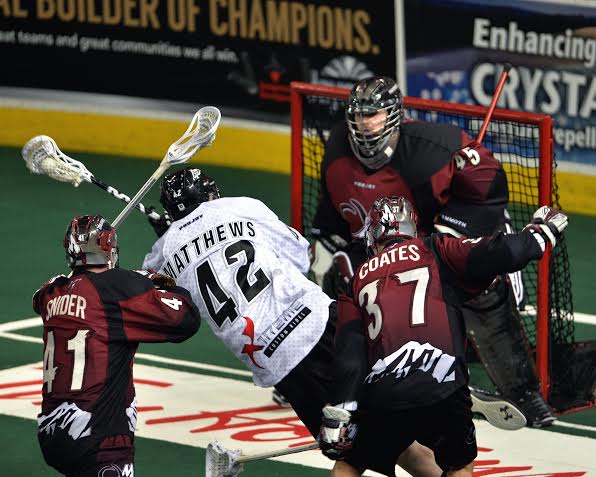 2015 Record: 9-9 (second in West Division/lost in first round of West playoffs)

The 2015 edition of the Colorado Mammoth generated 212 goals for, good for fourth-best in the league. Although the departure of Drew Westervelt and his 68 points might seem like a big hole to fill, all of Colorado’s offseason activity should provide ample coverage to make up for it.

The biggest acquisition on offense was Callum Crawford. The former Minnesota Swarm star picked up 53 points in 12 games last year, but he has also eclipsed the 90-point mark twice in his career and should be able to slide right into Westervelt’s old role on the right side.

Getting a full season out of Jeremy Noble should also pay big dividends. After picking him up at midseason last year, Noble put up 39 points in just nine games, putting him in the running for Rookie of the Year honours. Noble is dangerous and still has tons of upside. He should easily hit the 80-point mark in his sophomore season and could reach much higher.

With Noble and Crawford manning the right side, leftie stars Adam Jones and John Grant Jr., supported by All-Rookie team forward Eli McLaughlin, should be given more room to operate. Like Noble, McLaughlin has plenty of upside and could see significant gains from his 38-point rookie campaign. Jones and Grant Jr. remain two of the most dangerous players in the NLL, with both over the 90-point mark in 2015 (Jones: 93 PTS; Grant Jr. 91 PTS).

Put all this together and you have the makings of what could be one of the most dangerous offensive units in the league. Expect to see these guys light the lamp a lot in 2016.

According to the NLL website, the Mammoth do not have a single player listed as playing transition, including defending Transition Player of the Year, Joey Cupido, who is currently listed as a defenceman.

Don’t let that fool you.

Cupido had a breakout season in 2015 where he contributed career highs in goals (16), assists (15), loose balls (117) and caused turnovers (40), making him a big contributor on both ends of the floor.

Defensemen Cam Holding and Creighton Reid were both good for about a point per game last year as well, so they can also turn the ball up the floor in a hurry. The return of Ilija Gajic after a two-year stint with the Vancouver Stealth should also help matters—he registered a career-high 28 points last year and can take a faceoff now and then if needed.

Colorado gave up the fourth-most goals in the NLL last year (218). Part of the problem was that the team collected the second-fewest loose balls in the league (1,023) while also posting the second-worst penalty kill (46.8 percent success).

As a result, the Mammoth’s biggest retooling program during the offseason was on the defensive end. Five players are gone, replaced by five new ones. Greg Downing, picked up from the Swarm, is a solid defender who grabbed 74 loosies last year while also forcing 21 turnovers.

Draft picks Bryce Sweeting and Jordan Gilles have also been added to the roster.

Expectations will be high for Robert Hope to build on his 2015 rookie season where he grabbed 72 loosies while forcing 28 turnovers.

If Hope and Downing can solidify the back end and Holding, Reid and Cupido can drive the transition game, the defensive end should be under control.

Colorado has two solid young options between the pipes this year. Starter Dillon Ward (12.55 goals against average, .760 save percentage) had a good sophomore season. When he went down to injury mid-season, rookie Alex Buque was not only able to step in, he dominated in relief, posting a 9.36 GAA and .808 save percentage.

The future looks bright at this position for the Mammoth.

Chapman, Woods and Lincoln all have NLL experience, so they can jump in and contribute if the team gets hit with the injury bug. Lincoln is back with the Mammoth after spending some time with the Stealth; in his previous stay with Colorado, he notched 74 points over parts of three seasons, so he has the ability to make an impact right away if needed.

Tyler Codron and Cam Flint are currently out of commission (Codron is on Injured Reserve; Flint is on the Physically Unable to Perform list), but both could come back to add depth to the roster—Codron snagged 42 loose balls last season while Flint scored three points in four games in 2015.

Colorado has improved themselves on offense and defense going into the 2016 season. Odds are, Ward and Buque will also be better with a year more experience under their belts. All this adds up to a better record for the Mammoth than they produced in 2015. Whether or not they’ll be able to hang with the Saskatchewan Rush to compete for the division title or if they can hold off a much-improved Stealth squad remains to be seen, but they dropped both of their preseason games, so they may still need some time to mature into a competitive roster.

Their first official test takes place on Jan. 1, 2016 when they host the Georgia Swarm at the Pepsi Center.