When I was asked by Marisa Ingemi in the fall of 2011 prior to the start if training camp for the upcoming 2012 NLL season, never did I expect to have a two weekends that I will always remember.

August 10, 2013 I took the train to BWI Airport where Bill Criss from www.marylandsportsinsider.com picked me up and I went to cover the Bayhawks/Hound regular season finale.  That night I took part in being part of the broadcast of the game, my first professional one.  I can’t thank those guys enough. 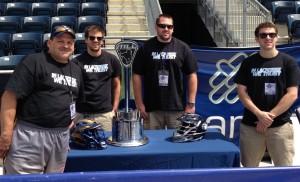 But this past weekend at the MLL Championships obviously blew it away. To start I was with a group of guys that I hope to work with again, we have great chemistry, Brendan Staudt, Tim Pierce, and Andrew Goldberg.  When we arrived at PPLPark Friday, we where told we have our own booth for the weekend. Never thought that happen as we worried were we would do three radio shows.  After doing a weekend preview show Friday night and talking to Matt Danowski of the Charlotte Hounds it seemed business as usual.. Then Saturday came!!!

After our morning show to preview the Semi-Finals, Andrew and I walked the concourse to see who was around and also to buy a hat.  We came across a familiar face in lacrosse,  the coach of the 2013 NCAA National Lacrosse Champion Duke Blue Devils, John Danowski. The coach was more then happy to give us a few minutes of his time before going to the stands to watch his son Matt defeat the undefeated Denver Outlaws.

Once the game was over we went down to the field for post game interviews with Matt Danowski, Mike Sawyer, Mason Poli, and others, then back up to the booth for game two between Hamilton and Chesapeake.  The four of us watched the game, (Andrew/Tim blogged and tweeted it) took some notes for post game interviews as well as information for the Sunday show.  The game ended with Chesapeake defeating Hamilton to advance.

Here is where the fun really starts…  While interviewing one of the greats  Casey Powell, my interview was raided by Jake Steinfeld, you can hear Jake saying  “Don’t ask him how the team did it, ask how is he still doing it”  A few minutes later after interviewing Mike Kimmel and Hamilton coach Dave Huntley, there was Jake Steinfeld at mid-field, So I said…why not.   Brendan and I made our way over and Jake gave us about five minutes of his time.  He was impressed with the crowd, the support, etc.. and appreciates what we do at www.inlacrossewetrust.com  (yes he does read the lax sites) Jake stated its great to see the word getting out.  As we ended our interview he put me on the spot (set me up) as to who will win the finals.  I figure I go underdog and say the Hounds.  I get a tap on the shoulder, as I turn its Bayhawks goalie Kip Turner..BUSTED!!  That led to the Kip Turner interview, and a lot of laughs.

Much of the same on Sunday, but as we did the radio show Coach John Danowski surprised us and came into the booth to join us for the last segment, and to talk about what Charlotte needs to do to win the game, as well as telling us how his Blue Devils are getting ready for the season. It also seems that what Jake did to me got around, as I went to the media room for food and drink it was the conversation at the time.

As the final horn sounded Chesapeake Bayhawks won their 5th title, and I had a couple  more interview to do, John Grant Jr, and Drew Westervelt before heading back up to the booth one final time to pack up and head home after a weekend to remember. 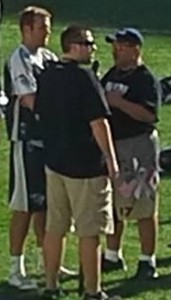 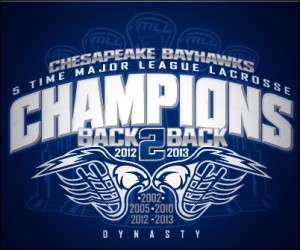 Thank You to my team.. Tim, Andrew and Brendan, and of course our boss Marisa for allowing us this opputunity.  Thank You MLL, players and staff and Coach John Danowski, a first class guy all the way. 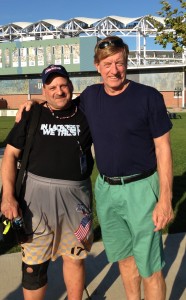