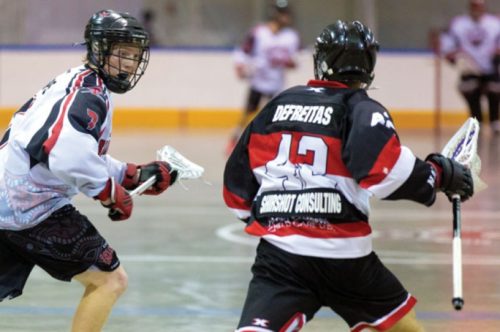 The Coquitlam Adanacs were a goal away from being shutout of the opening two games of the BCJALL Finals, despite going undefeated in 25 straight regular season and playoff games.

It took overtime goals from Reid Bowering and Dereck Downs for the A’s to tie their best-of-three series against the Delta Islanders 1-1, setting up a pivotal third and deciding game. That goes in Coquitlam on Tuesday with a 7:30 ball drop at the Palace on Poirier.

Although the best-of-three series isn’t as significant as recent years past given both teams will go to the Minto Cup in Langley, there is something to play for for the Delta Islanders, who have looked decidedly impressive in the first two games of this set. This was an excellent chance for the Islanders to make a statement and they did just that in the first game, winning 9-6 last Wednesday.

Delta brought an upstyle tempo to the first game, running high off the momentum of putting away the New Westminster Salmonbellies in six games. They potted the first four goals of the game, the scoring spread amongst four different players. Coquitlam was able to draw level with four of their own in the second period, and the teams traded goals until Jon Phillips buried to put the Islanders ahead for good.

It was an impressive win and the short series almost seemed to favour Delta more than I would have thought. They had a hot goalie in recently acquired Kevin Orleman and we all know how it goes when a team, as offensively talented as they might be, runs into a hot goalie – especially one they haven’t seen since Orleman played for the ‘Bellies last season.

In game two, it appeared Coquitlam got the message that Delta wasn’t going to treat this any differently than any other game. They jumped out to a 3-1 first period lead and doubled the Islanders after 40 minutes by an 8-4 scoreline.

Then, everything dramatically changed.

After a quick goal by Downs just 38 seconds into the third period to give the Adanacs a 9-4 lead, Delta reeled off five unanswered to storm back into a 9-9 tie. Cam Milligan tied the game with just 11 seconds left and the Delta net empty.

Riley Phillips opened the scoring in the ten-minute non-sudden death overtime period just over a minute in before Bowering and Downs scored just 44 seconds apart to give Coquitlam the eventual win.

It was an athletic affair with both teams at virtual full strength. You look at some of the names on the scoresheet – Chetner, Downs, Pace, Semple, Bowering, Fraser, Bromley, Milligan, Messenger, Milburn – and you really wonder why this series isn’t five or even seven. I think it was a bit of a cop out to make this a three-game series, although it’s self-serving and as a fan of BC lacrosse I see the intent.

Now that Delta has shown themselves they can compete with the Adanacs shot for shot, we will see a much different Islander team. More interestingly might be to note the Ontario finals, where the Orangeville Northmen have jumped out to an unbelievable 3-0 series lead over three-time Minto Cup defending champion Six Nations. It would be a shocking upset given the skill Six Nations boasts and how easily they ran through their league, but it goes to show that there is a ton of quality in Canadian junior box currently.

But Tuesday’s game also has something other than the league trophy on the line. Whether it’s Orangeville and Six Nations, it looks as if that’s who will be the opening opponent for the loser of this series. Even though the Calgary Mountaineers can’t be overlooked, it’s a much easier way to kickoff the tournament with a big win rather than a humbling loss, given how the games are on again the next day.