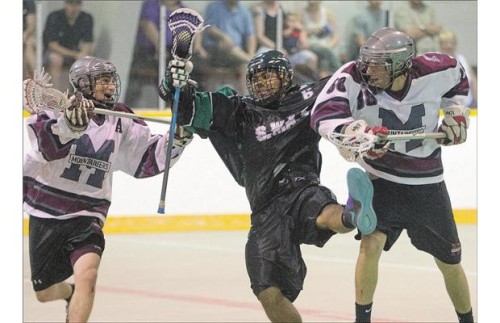 The Alberta junior “A” season wrapped up last week and basically met a lot of people’s expectations. The defending league champion Calgary Mountaineers made their lives easier securing the first overall seed in the playoffs and a first round bye with their 15-2-1 season. With rivals the Okotoks Raiders 12-5-1 playing the Edmonton Miners 7-11 it’s much needed rest for a veteran laden team while the lowly Sherwood Park Titans lick their wounds and come back more experienced next season, finishing with a lowly 1-17 record to close out the 2015 regular season.

With the second and third place team meeting in a best of five series, the Raiders took a commanding 2-0 series lead after two hard fought but dominant games by the Raiders over the Miners this weekend in Calgary. If the Miners want to force another game they will have their hands full this weekend with a Raiders team that seems to be firing on all cylinders.
The Raiders finished the season with the top scorers in the league with Brett McIntyre and Leighton Gibson finishing one-two overall scoring 78 and 72 points respectively but considering the next closest player was Nik Farrus of the Miners, who finished with a solid 70 points there was no blow out player like the league has seen in previous years.Also, there was no scoring domination by the Mountaineers who had three players finish sixth, seventh and eighth being Jordan Prysko, Lucas Claude and Laszlo Henning. I believe it showed a strong team wins by committee with all three players reaching at least the 50 point plateau.

The winner of Alberta earns the right to play the winner of the BCJALL in a best of seven format hosted this year in Alberta as Coquitlam was the BC representative last year as host province.