The Patriot League is one of the most fascinating to follow in college lacrosse. Not only because of teams like Loyola defeating the likes of Virginia and Johns Hopkins, but because the teams ranked second through fifth in the conference can compete with nearly anyone.

Navy, now 2-1 on the season, were one of the biggest dark horse picks before this season to make the national tournament. The Midshipmen proved themselves as a contender when they nearly defeated Hopkins earlier in the season, but their victory over Delaware yesterday was one of the more interesting games in the entire division this year so far.

It’s not often that you see a lacrosse score confused with a soccer score, but Navy’s 5-1 win certainly could have been.

On Monday, Navy goaltender John Connors was named the Patriot League goalie of the week, and rightfully so. There were stretches of over a half hour without a goal for either side, and at the half it was Navy who held onto a robust 1-0 lead.

Delaware didn’t get on the board until more than five minutes passed in the third quarter, and that goal tied the contest at one goal apiece. Navy would score the next four, and Connors shut out the Blue Hens to make it a 5-1 final. It was a career high .857 save percentage on the day for Connors, and defenseman Chris Fennel was named the Patriot League defensive player of the week.

“That was a heck of a job by our defense,” Navy coach Rick Sowell said to Inside Lacrosse. “They played [the same as] they had been practicing all week. They really were on top of their game. … It’s hard to get any better than limiting a team to one goal.”

Earlier in the day, however, it was the Midshipmen’s rivals at West Point that showed Patriot League teams can also find the back of the net….

The Army Black Knights rattled off 23 goals against the Virginia Military Institute in a 23-3 victory on Sunday afternoon. Three players scored four goals, including freshman Nate Jones, with the other two being Cole Johnson and Connor Cook. The ‘Knights went up 10-0 in the game and dominated throughout.

Five goalies had a chance to play in the Army net as they held the Keydets to just three goals. One of those goals came with 30 seconds left in the first half, so they beat the Blue Hens as far as being the quicker of the two to get on the board.

AJ Barretto, the starting goalie for the Black Knights, made nine saves in the first half, so the Keydets were producing offensive chances.

Maybe the result shouldn’t have been all that surprising, as Army topped the Keydets with one more goal last season, 24-3.

Navy will head to Boston University this week to open conference play while Army will travel to Syracuse on Sunday. 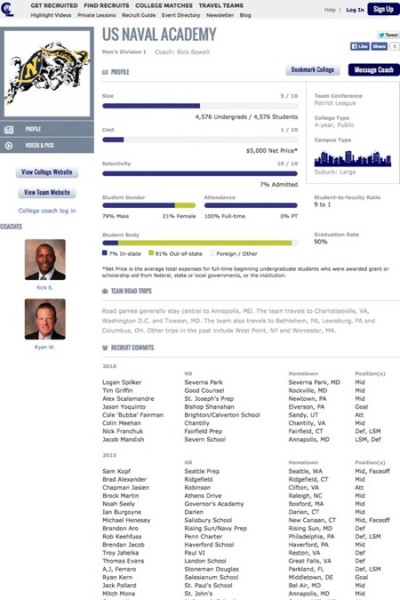