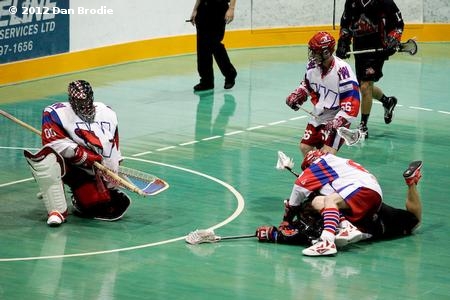 The WLA season is fully underway and while there have been some surprises, some controversy and some bad optics, the product on the floor has looked good so far through the season.

A lot of that can be attributed to the league’s seven teams getting stronger as a whole. There isn’t a team that looks terribly out of place like there may have been in year’s past. Although the MLL and Ontario summer ball have taken away some of the league’s bigger talents, there is still a competitive product being put on the floor most nights.

You look at a team like the Nanaimo Timbermen, who I watched play in Maple Ridge a few weeks back, and they look a lot more confident and comfortable playing at this level under Kaleb Toth. They’ve had a boatload of picks in recent drafts and some of those guys are finally starting to commit to living on the Island, which is a huge bonus for that organization. As long as they keep finding the right type of team guys, there’s no reason to say that Nanaimo won’t continue to build as an organization and compete – it just may come a few more years down the line.

Speaking of Maple Ridge — beyond all of their recent run-ins in the league and two straight losses to Victoria and Burnaby, the Burrards are out to one of their best starts ever and still sit atop of the league standings with 11 points through eight games. The most impressive thing, as Burrard fans are eager to tell you, is that they were missing a chunk of their core due to Saskatchewan’s run to the NLL Championship. They’ll definitely see a boost in talent with those guys getting back into the lineup, but what they are able to contribute to Maple Ridge’s Mann Cup run in a few months will be more important.

The team that beat them this past Thursday, the Burnaby Lakers, are going to be an intriguing club to keep tabs on as we get later into the year. Past editions of the Lakers haven’t gotten good enough goaltending and even as they were building quite a competitive team, that was always something that held them back. After acquiring Zak Boychuk from Nanaimo in the offseason (amongst other key players Burnaby was able to pry away from the Island like Eli McLaughlin), he currently leads the league in save percentage (86.2 per cent) and is second in goals against average (6.25).

With a tough defence led by Matt Beers, the Lakers look more comfortable locking other player’s stars down, but they could use a little more on the offensive end to supplement the strong defensive structure. Albeit, it’s been only five games, and they were missing Robert Church and Josh Byrne for the first handful of games, so it’s not a dire situation. If those guys can get into the lineup and start scoring right away then Burnaby will be one of the deepest teams in the league.

One team that has surpassed expectations is the Coquitlam Adanacs. They’re only 3-2 through five games but Dan Lewis has been great in net and everyone is contributing. Four different players are playing at a more than goal-per-game clip so the scoring has been balanced. That’s good when there aren’t a lot of big names on your roster and you know you can count on guys to chip in every game. The A’s have a pair of tough games this weekend against Burnaby and Maple Ridge.

Two of the top teams struggled at the start of the season but have since done well to turn around their bad fortunes. New Westminster started out of the gate 0-3 but have since gone unbeaten in four with a tie in their first battle against the Burrards. One bright spot on the team has been Dane Sorensen, who has 13 goals in seven games and has been able to take off some of the attention regularly given to a guy like Logan Schuss.

Victoria hasn’t struggled to the degree New West has, but there are some visible chinks in the armour of the defending champs. They have lost to Nanaimo (although they did drop two to them last year) and Maple Ridge already and struggled to get their season going. They’ve won their past two games and looked great against both Langley and Maple Ridge in the process. The Maple Ridge game was a big testament to this team’s character as they come back from a first period deficit to win 12-10, handing the Burrards their then-first loss of the season.

Cody Hagedorn and the D had a bit of a rough start to the year but they’ve also gotten a lot better over the last few games. They held the Thunder to three goals and Hagedorn made 26 saves on 29 shots while stopping an additional 27 of 37 the next night. Offensively, Ian McShane has been an excellent addition to the team – the Nova Scotia native has six goals and 15 points in his first seven games with the Shamrocks.

Langley is clearly in a rebuild this year and have struggled to score enough goals to be competitive in games; they’ve scored just 14 goals in their last three games. The addition of Cole Shafer has been important to Langley, scoring three points in their only win of the season over Nanaimo and five in New Westminster this week.. Some thought James Rahe may have been hurt in Thursday night’s contest against the ‘Bellies and that would’ve been disastrous to the Thunder’s season. But he played later in the game and disaster was avoided. Now that they have guys like Nik Bilic and Brett Mydske back full-time, Langley might be a team to watch later in the season.