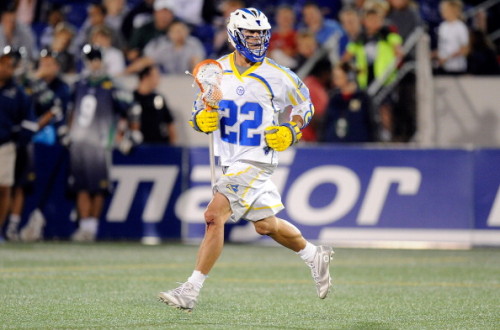 Week three provided some intriguing storylines as well as entertaining games.  Chesapeake won its one hundredth game, the first MLL team to reach this milestone.  Florida attempted a comeback in this game with backup goalie Adam Fullerton but fell short.  The loss leaves the Launch 0-2 and with more questions now than ever before.  Boston almost failed in their comeback bid and their hundred victory milestone must wait till next week for another opportunity.   The Hounds d mids put the bite on Cannons middies and earned an overtime win.  New York extended its win streak to three and even though Rochester made this meeting a closer affair.  The Lizards showed that themselves the team to beat at this point in the season while Chesapeake keeps finding ways to win.

Dave Cottle continues to prove he is the MLL’s version of Bill Belichick and Bill Walsh and has his Bayhawks 2-0.  Many have pointed to Cottle’s penchant for collecting veteran players and joke about social security checks handed out at practice.  Anyone believing that Chesapeake is a retirement home for aging lacrosse players needs to get a grip or a clue.  The Bayhawks won back to back MLL titles with just such veterans.  Brian Spallina, Casey Powell, and Nicky Polanco were just the type seasoned player that Cottle acquired during the back to back titles.  Casey Powell revived his career and played a full MLL season last year for Florida and earned MVP honors.  This past weekend, Nicky Polanco showed why he won the two time defender of the year award (there was someone other than Brodie Merrill that held the honor more than once).

Polanco spent the majority of the game on Powell.  Aside from an early goal by the ageless wonder Polanco got the better of the matchup.  The Bayhawks followed their veteran defensive leader’s example and rallied to take the lead and never give it up despite the Launch’s offensive frenzy to close the gap.  Tyler Fiorito did his part with some incredible saves.  Fiorito makes a strong case for keeping the starting goalie job with his performance in the early season.  Chesapeake was without some of their key players due to injuries, indoor and coaching commitments (Evans, Abbott, and Danowski), but it did not matter. Michael Evans injured his back the previous week at Chesapeake, but it did not matter as Kyle Sweeney moved to close defense and Dan Burns spelled C.J. Costabile at LSM.  Coaching and NLL commitments held out offensive players and Ben Rubeor, Matt Mackrides, Nikko Pontrello and Matt Striebel make Bayhawks offense work.  Defensive midfielders like Jovan Haye invert and put the pressure on Florida to stop their athleticism.  This is not the Chesapeake team that won back to back titles, but they may be more dangerous as the season progresses.

Florida called on backup goalie Adam Fullerton when Brett Queener went down with an ankle injury following a pile up behind the crease.  The former Army goalie ranged out of the goal as well, but unlike Queener, Fullerton patrolled the area around the goal and punished anyone in a different colored jersey crazy enough to get too close.  Fullertron’s aggressive play and saves combined with Queener’s exhortation of his teammates from the sidelines could not slow the Bayhawks offense.  Tucker Durkin and P.T. Ricci turned in impressive performances and Durkin continues to show why he is an all world selection.  Even with the play of these two long sticks, Chesapeake shifted the ball away from them.  Florida needs to solve its defensive woes and with Queener’s injury the time is sooner rather than later.  Kieran McArdle was beaten on this weekend but kept going the cage and finding the back of the net.  McArdle seems on a mission to secure an all pro selection to follow up his rookie of the year award.  Florida’s offense needs more midfield punch to go along with its attack as well as free up Steven Brooks to take advantage of grippy ball’s return and launch two point shots.

Boston lost as well, but if their loss has the Cannons smarting but with less questions than the Launch.  Boston came from behind to tie the game in the final seconds.  Like Florida, Boston has their starting goalie replaced.  Jordan Burke was pulled in favor of Adam Ghitelman in the later stages of the game, but Scott Ratliff’s two point goal got the Cannons going (welcome back grippy ball).  Ratliff has made it his mission to prove every person that picked Boston to finish in last place was wrong.  With his confidence, hard work and downright stubborn streak he might just will the Cannons into the play offs.  I would not bet against Ratliff and the Boston this season.  Even James Connolly contributed two goals for the Cannons in his first game in two years.  Charlotte may have taken a bite out of the Cannons midfield productivity this past weekend, but this group is still developing their chemistry.  As the pieces fall into place, this team will surprise anyone foolish enough to overlook them.  Boston seems to embrace the underdog role this season and make every game a fight.  They will be mad about the loss and looking to take their frustration out on their next opponent.

Charlotte got their offense on track this weekend and while their abundance of defensive middies collared Boston for the most part.  The Hounds did fail to put the game away in the final moments as the Cannons mounted a flurry to tie the game and send it to over time.  Is it better to be lucky or good?  I have no idea, but what I do know is that the team that wants it more finds a way to win.  Charlotte found their way and will look to build on this win.  The concern for Charlotte is that they had Boston on the ropes twice in both the first and second half and failed to spike the Cannons.  This proved to be the case against Rochester as well.  The Hounds allowed the Rattlers to tie the game in the final seconds and win in overtime.  The talent in the league is just too great to allow teams any kind of chance to mount a comeback.  The Hounds travel to Denver next and cannot afford a mile high melt down against the defending champs.

New York is playing like the big brother of the league right now.  They dominated the face offs and despite Rochester’s improvement from the first meeting, the Lizards offense took advantage of the Rattlers miscues in the transition game to pile up points.  Gurenlian’s dominant performance at the X (even a pulled hamstring failed to tame the Beast) and Rochester’s turnovers provided New York with more possessions.  The Lizards offense has too many weapons and can score from anywhere.  Rochester closed the gap with two late two point blasts (grippy ball how I missed you last season).  The weekend highlighted the fact that blow outs are few and far between in this league.  The Rattlers are a team in weekly roster transition as players become available from their coaching and NLL commitments.  The Rattlers took it on the chin from the Lizards and they will not forget that, especially after coming back to within two points in this latest game.  It is good for New York to get this Rochester team early in the season before they get to full strength.

Take aways from this weekend are that no lead is safe.  Get the other team down and you had better put them away.  The MLL is filled with talented players and every player on a roster can come off the bench and contribute.  Back up goalies and players answered the call and made plays as did the established stars.  Chesapeake won their hundredth game in franchise history and are bent on proving that last year was a fluke.  Grippy ball and the two point shot is back.  Boston is taking on all comers and not backing down while New York keeps focused on its mission to win a championship.  At this point in the season, Charlotte, Florida, and Rochester are all looking for answers.  Even though the Hounds won they keep letting teams back in games.  Florida needs to start stopping the other team’s offense and find some more offensive weapons. Rochester needs to get their full team on the field to get back to last year’s form.  Whatever the answers are to the questions, the season will be entertaining to watch.