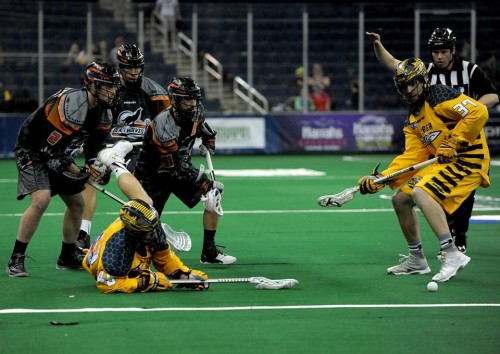 Playoff lacrosse will be exposed to the fans of the New England Black Wolves for the first time in the history of the relocated team on Saturday when the Wolves host the Georgia Swarm at Mohegan Sun Arena. The Swarm, who relocated from Minnesota to Georgia before this season, will also make their first playoff appearance since the move.

New England clinched the second seed in the eastern conference in just their second season playing in Connecticut. Despite being under .500 for the fourth straight year, the Swarm make the playoffs for the first time in the past three seasons, and first in Gwinnett. The Black Wolves may be the most surprising out of any playoff team, however, after a 4-14 inaugural season.

Both teams look drastically different than they have in the past few seasons. The addition of Shawn Evans was obviously a huge one for the Wolves, as he was second in the league with 118 points this season. Evans did not play in the game at Rochester to close out the season with a shoulder injury, and head coach Glenn Clark says he is questionable for tomorrow night.

New England as a franchise is the oldest in the NLL, after being located in Philadelphia since 1986. The Philadelphia Wings won the league title in 2001, but since then the franchise is 0-4 in the post season. This is the first playoff appearance since 2013.

Randy Staats, one of the front runners for the rookie of the year, was ninth in the league with 95 points, tied with the likes of veteran star Dan Dawson. Staats’ 95 point total, along with his 59 assists, shattered the rookie records previously held by Vancouver’s Rhys Duch. Shayne Jackson also had a breakout season in 2016, with 83 points.

The match up is one of two surprising offenses. Georgia finished second in the NLL averaging just over 13 goals per game, and New England fourth at 12.8. New England’s 212 goals allowed were the fewest in the east, and the third fewest in the league overall behind Colorado and Saskatchewan. Georgia’s 240 is the second most in the NLL. The match up will be between New England’s Evan Kirk, and Georgia’s starter Brodie MacDonald.

New England won the season series 3-1. Most recently, the Wolves topped Georgia 21-11 at Mohegan Sun on April 23rd. Georgia’s lone victory over New England came at home with a 16-9 win.

In a season with more parity than we are used to seeing in the NLL, both of these teams have a chance to make a run and create some overturn in what the top teams usually are. It’s rare for both Toronto and Rochester to not be in the picture (first time in seven years), and these two relocated teams will have the opportunity to use that to their advantage.

The winner of the first game will host the Buffalo Bandits in game one of a two game semi final series.