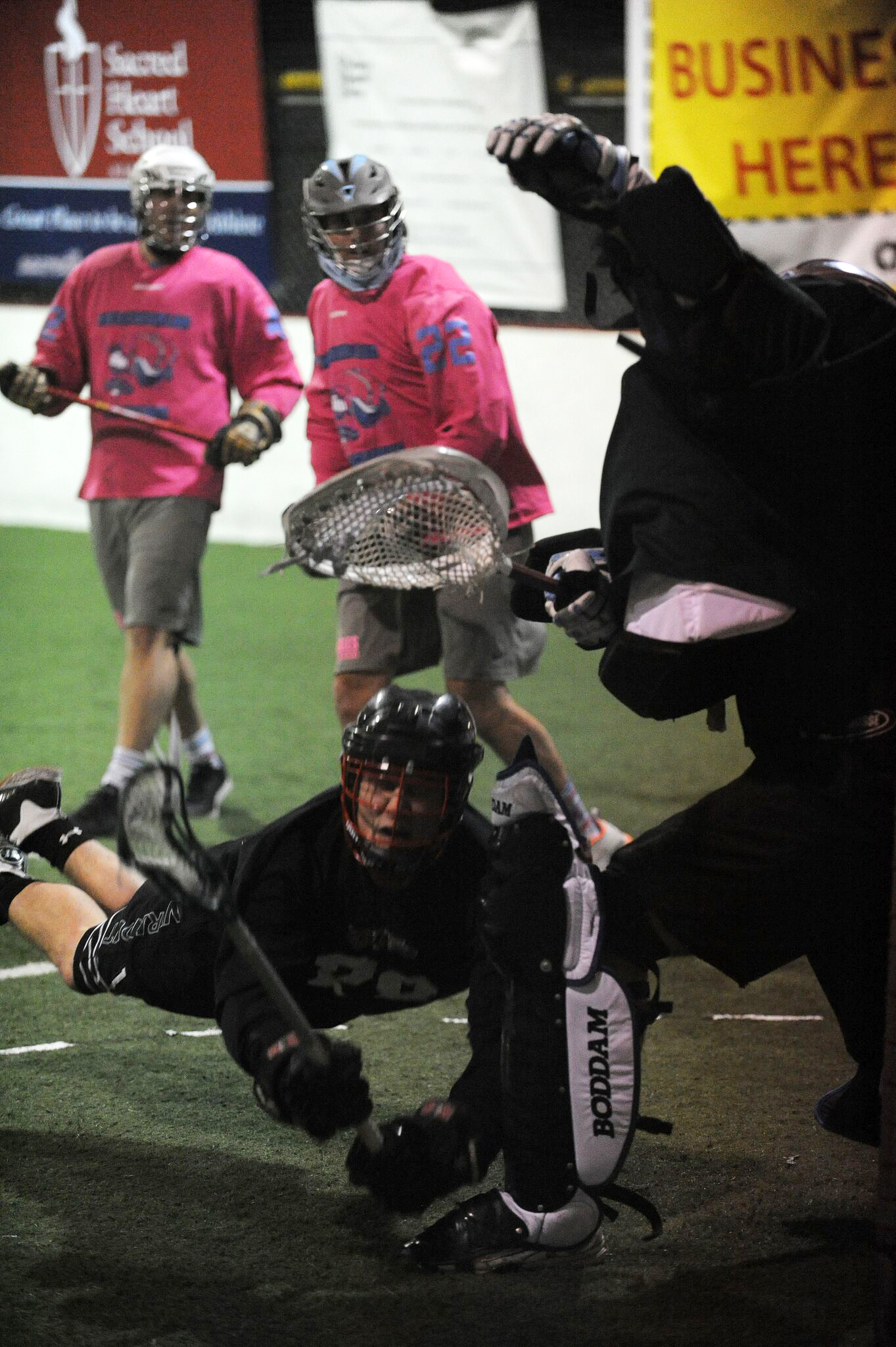 After blowing a six-goal lead, the defending champion Blazers scored the game’s last five goals to earn a hard-fought, come-from-behind 12-8 victory over the Minutemen and a chance to win their sixth straight Boston Box Lacrosse League title.

That championship game will be the fifth straight finals match-up against Bullseye, as the regular-season champs blitzed PrimeTime 23-9 in the first semi-final at South Shore Sports Center in Hingham on Feb. 19.

The Blazers appeared ready to pull off an equally dominating performance against the Minutemen – who had won two of three regular-season meetings between the teams – as they jumped out to a 6-0 lead and kept the Minutemen’s potent attack scoreless for the first 21 minutes of action.

Once the Minutemen hit the scoreboard, however, they hit it hard, going on their own six-goal run and keeping the Blazers scoreless for 18 minutes in the process. Will Jennings, who led the BBLL in regular-season goals with 35, scored four straight in that comeback, tying the game at six with 13 minutes remaining in regulation.

Kyle Baker answered with his second goal of the night less than 30 seconds later, but Jennings scored his fifth and sixth goals of the night over the next six minutes, giving the Minutemen their first lead of the night at 8-7 with 6:51 left in regulation. Baker again responded within 30 seconds for the Blazers to tie the game, and Brandon Dube gave the Blazers back the lead 25 seconds later with his second goal of the night. Kurt Hunziker scored twice in 35 seconds as the Minutemen pressed to get the ball back and Joe Evans finished off a stellar night in net with his second length-of-the-floor assist, hitting Greg Rogowski and the league’s regular-season leader in points (25 goals, 35 assists) put a bow on the game with the night’s final score.

Baker’s timely scoring and play in the clutch earned him Jukebox MVP honors in the first semi-final game. Jukebox Lacrosse has partnered with the BBLL to honour top players in the league’s playoff games, as well as the Most Valuable Player Award for the entire season.

Besides Baker, Hunziker also netted a hat trick for the Blazers, who got 2G/1A nights from Rogowski and Dube and multi-point games from Randy Fraser, Jared Arntzen and Evans in the win. Evans, who led the league in save percentage at .769 in the regular season, finished with 28 saves.

In the night’s first game, Bullseye dominated in every possible way, from the 71 loose balls – to 44 for PrimeTime – to the 13 caused turnovers, compared to six for PrimeTime, and ultimately to the scoreboard.

PrimeTime never scored two goals in a row and Bullseye answered eight of nine goals within 1:03.

PrimeTime got two goals each from Nick Samson, Kyle Minaker, Brendan Grant and Peter Ashmore. Minaker added three helpers on the night, and Samson two. Alex Bunick – whose 108 loose balls during the regular season was tops in the league – led PrimeTime with 8 loosies on the night.

The outcomes from Feb. 19 set up a familiar final for the BBLL, scheduled for 9 p.m. on Feb. 26, as the Blazers have beaten Bullseye to win their last four BBLL titles. This season, as in the last two years, Bullseye has won the regular-season title and the season-series between the two squads, so the Blazers – who put the only blemish on Bullseye’s otherwise-perfect season with a 12-11 win on Jan. 22 – will not be daunted by the task at hand.