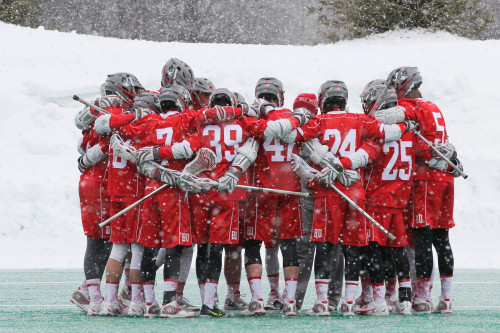 Christian Carson-Bannister did not play in net; instead the time between the pipes was split between Colin MacDougall and Sean McGovern. MacDougall allowed seven goals on 14 shots and McGovern allowed two goals on three shots from Bryant.

Sam Talkow won 12 faceoffs and lost only four to lead BU. Joe Stucky won all six of his faceoffs against the Bulldogs. Talkow, also an offensive presence, got off four shots and scooped up four ground balls.

The offense was centered around Dearth, Myers, Wilson, and Gregory, who each had five shots or more in the contest. Ruh scored on two of his four shot attempts as well and was involved in the offensive plays often for a rookie.

In two games so far this preseason (the other being against the CUFLA champion McGill Redmen), James Burr has posted seven goals in total to lead the team. Jack Wilson has four goals in all. Carson-Bannister did play in the first game where he allowed three goals and made five saves. McGovern had been the backup in that contest.

The end of the preseason for the Terriers will be next week when the team travels to Andover, Massachusetts, to face the Division II Merrimack Warriors, the host team, and also the Quinnipiac Bobcats.