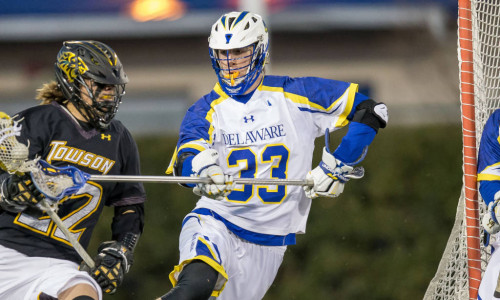 Overview: Once a perennial powerhouse program, The University of Delaware Men’s Lacrosse team has been in a consistent slump over the past four seasons. Since 2011, which featured the Blue Hens’ last winning season and NCAA tournament appearance, the program has an overall record of 23-38 (.377 win percentage) with a conference record of 4-18 in CAA play. In 2016, Coach Shillinglaw and the boys look to change the recent standard set by the previous teams at Delaware. Shillinglaw, in his 38th season in Newark, is just two victories away from his 300th win with the team. Although an impressive individual feat, he grows his players through a team-first mentality and looks at this as just another accomplishment during his lengthy 41-year coaching journey. Behind a young roster and captains Jackson Finigan, Elijah Conte and Steve Delargy, the Hens plan to use a balanced offense and experienced defense to regain the Colonial Athletic Conference Crown.

Strengths: Defense and Goalie play—The heartbeat of this Delaware squad is doubtlessly their defensive unit. Connor Lalley, an impressive sophomore, and Jared Horoski, a seasoned veteran, lead the assembly. Lalley splashed onto the scene last season as a freshman, making 12 starts en route to All-CAA rookie team honors. This year, Lalley derived All-CAA Preseason Team honorable mention as he looks to be the vocal leader for this Blue Hen defense. Horoski will start at close defense for the third straight season and brings a level of physicality to the field that is unmatched by opponents. Look for notable LSM play from senior Joey Prieto and classmate Alex Martinelli. Prieto has a profusion of experience at the position and demonstrated excellent stickwork in the open field throughout fall ball. Martinelli, who has experience at both LSM and short-stick midfield, will provide depth behind Prieto. Conor Peaks, Delaware’s senior goalkeeper, will start in net for his fourth straight season after taking over the spot midway through his freshman campaign. Peaks has logged 1,499 career minutes in net for the Hens, which provides incomparable experience for the quarterback of the defense.

Weaknesses: Offense and attack—Offense is without a doubt the weak spot on this Delaware roster. The Hens graduate their top three scorers from last season, all three of which just happened to play attack. Fortunately, the team still has Jackson Finigan for two more seasons. Finigan netted 15 goals last season while registering 11 assists for an imposing 26 points at the midfield position. Along with Finigan’s firepower, the Blue Hens return junior attackman Paul Major and midfielder Will Hirschmann. Major found the back of the net nine times last year while Hirschmann buried seven goals and dished two assists. Rounding out the inexperienced Delaware offense is captain Steve Delargy, who recorded three starts last season and seven total points. For the Blue Hens to be successful this year it is imperative that these individuals increase offensive production early and often.

Top Returnee: Look for Finigan to be the overall leader for the Blue Hens this spring. The team’s top returning scorer undeniably earned his teammates’ respect last year with his tremendous sophomore crusade. Finigan is currently the team’s active career leader in points (46), goals (22), and assists (24). Expect Shillinglaw to put the ball in Finigan’s hands throughout the season.

Breakthrough player: Don’t be surprised if Major has a breakthrough year at Attack. Throughout his career at Delaware, Major has adapted exceptionally well to the speed of the game. Major started eight contests as a freshman as well as eight games his sophomore season and looks to finally earn a consistent spot on the starting attack unit. His excellent quickness and acute field vision could lead him to putting up double-digit goals this season.

Delaware will host Colgate in an exhibition game on Saturday, Jan. 30, at Delaware Stadium at noon and will open the regular season on Feb. 6 at Bucknell. The home opener is set for Feb. 13 vs. Mt. St. Mary’s at 1 p.m.