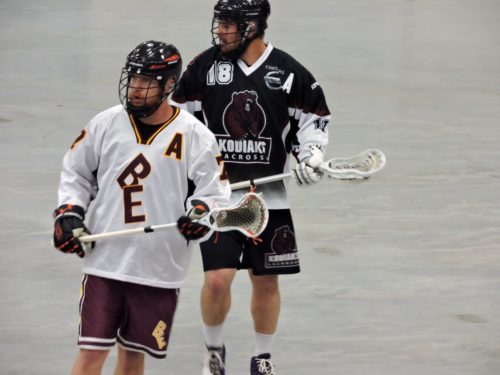 That’s what both the Brampton Excelsiors and Cobourg Kodiaks are playing for at this point in the 2016 MSL season. Both mathematically eliminated from playoff contention, the two fought each other Sunday night at the Cobourg Community Centre for the right not to finish last in the league.

The Excelsiors came out on top 16-6 much to the disappointment of the crowd who have yet to see their Kodiaks win a game on home floor.

“We definitely circled this one on the calendar, we really wanted to win this one,” Kodiaks assistant captain Derek Searle said. “Some nights it just doesn’t go your way and tonight was one of those nights.”

The Excelsiors came with a shell of a roster. They began with 15 runners which dwindled down to 12 as the game wore on. They were missing Mike Burke, tied for third in league scoring, and dynamic rookie Quinn Powless. Throughout the game, they also lost Tyson Bell, Phil Caputo, and Tyler Fereira. They were also without Tyler Carlson and instead had two junior call-ups as goaltenders. Jr B Excels netminder Cameron Dunkerley made his first MSL start and was excellent. Taylor Welch backed up. Dunkerley faced a good amount of shots, and the ones he missed, the posts and crossbar kept out. The Kodiaks, with a full roster, just hit post after post.

“We were nervous going in,” he admitted. “We were short a few guys… then putting that Jr B kid in net, a rookie in Jr B, we were nervous. But the last few games the guys have really come together and tonight it really showed. We played well on defense and supported the kid. We didn’t defer to any one guy, we played more like we did last year. I was really impressed. It was nice to get Dunkerley that ball, it was a lot of fun.”

Cobourg was strongest in the third period but they always turn it on when they’re already too far behind. Down 13-3, the Kodiaks scored three to make the score respectable but the Excelsiors added three of their own.

The Kodiaks started well, as usual, with Luke Laszkiewicz scoring just 1:03 into the game. However, as soon as the Kodiaks get down on the scoresheet, they seem to lack the confidence to come back. A couple of quick power play goals by the Excels knocked the wind out of the Kodiaks who trailed 4-2 after the first period.

“We lack the guy who can stop the run,” said Kodiaks assistant coach Jason Clark. “You look at a team like Peterborough who has Shawn Evans or John Grant. If a team gets on a 3-4 goal run against them they have the ability to stop that run and get their team back in it.”

Matt Crough sandwiched six and three goal runs by the Excels in the second period with a shorthanded goal, also sandwiched between four on three power play goals. Crough fought off four defenders to get in front of the net and put the ball over Dunkerley’s shoulder.

The Excels were 4/5 on the power play, a stat the Kodiaks are wary of, going 0/1 themselves.

“It’s not easy when you’re shorthanded,” Searle said. “I think we could have done a better job on the power play just creating better shots for Vigneux, but staying out of the box definitely helps.”

League penalty minute leader Broedie Birkhof, not long off suspension, dropped his gloves after he and Tyson Bell got into a high sticking match. Both received five for fighting although Bell held on to his gloves and helmet. Birkhof received an extra two for roughing allowing the Excels to score on the power play.

Tyler Roche received a roughing major after tackling Zac Reid in the second. Roche was slashed by Jayson Crawford but Reid was closer and willing to go. The two hit the floor before any shots were exchanged. Reid only received two minutes.

Kodiaks backup goaltender Davide DiRuscio started the game on the bench but replaced Rance Vigneux after six goals. DiRuscio allowed three before he knocked out Tyler Fereira in the corner with a right hook. Video replay (watched several times for accuracy) was unable to determine what part of Ferreira DiRuscio connected with but Fereira’s helmet had already been knocked off and he went down hard. Searle, who was also involved in the scrum, called immediately for the Excels trainers to attend to Fereira, who looked dazed and left the game.

“I want to watch the tape before I say anything else about that,” Stewart said of DiRuscio’s punch. “The one in Peterborough, it actually, it was just a slash to the nerve, it was almost like the brachial nerve in the neck and it just shut his whole leg down. It looked worse than it was. He definitely has a nice welt and he’s pretty sore. The one tonight was a whole different story.”

DiRuscio received a major penalty and a match penalty for intent to injure which carries an automatic suspension. The incident came only 31 seconds after Roche’s major, putting the Kodiaks on an extended kill.

“That’s the guy who gave him the concussion,” Clark said. “Whether it’s right or wrong, [DiRuscio] obviously wasn’t happy about it and there’s not much to say about it.”

DiRuscio was making his first appearance since June 12, when he suffered a concussion against the same Excelsiors. The coaches wanted to work him in slowly and started Rance Vigneux in his eighth straight game.

“[DiRuscio] wouldn’t have been dressed if he wasn’t ready to play,” Clark said. “He obviously hasn’t played in quite awhile so he was a bit cold and hadn’t faced too many shots… When they started running up a few goals there and getting on a bit of a run we tried to shake things up and put him in.”

Vigneux has fared well against NLL shooters despite the Kodiak’s 1-11-1 record. It was unknown how long DiRuscio would be out, but GM John Webb says the Kodiaks didn’t look for any help for Vigneux at the recent trade deadline.

“We wanted to give Ryan Shuetzkowski a good chance, he’s a great kid,” Webb said. “He did everything we asked him to do on and off the floor. Rance has been great. Rance has played very well. He faces a lot of shots every night against the best shooters in the world and he’s done more than his share the year.”

Cobourg has a chance to even the season series with one more visit to Brampton on July 21. But for both teams, the focus now is mainly on playing for pride and seeing what can be built for 2017.

“They’re young guys, they’re passionate about lacrosse… They know what it takes, but they are just very young,” said Webb of the team he has assembled. “They want to win. They want to win for the fans here.”

Clark, however, doesn’t use age as an excuse for the loss of confidence when the team gets down on the scoresheet when players are trying to show NLL teams what they can do and says players should be fighting for their spots next year.

“A lot of guys use this league to get noticed for the winter league,” he said. “If they can’t motivate themselves, if they can’t come prepared to play, the onus is on them. You can only do so much as a coach. There’s not much to say, that was a piss poor effort tonight. It’s 4-2 after the first and 13-3 after the second. It was unacceptable. Right now you have a few core guys who have shown they can play in this league and I guess you’re just looking more towards next year to see which guys are capable of sticking around and which guys aren’t. They’re all competing for jobs next year.”