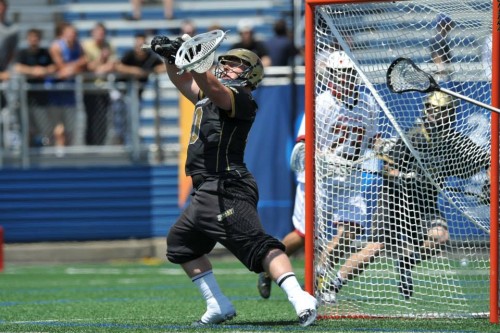 The Bryant University Bulldogs exploded offensively this afternoon with a win over the Manhattan College Jaspers. The damage: 16-3. Bryant’s sophomores Cam Ziegler and Ryan Sharpe led the charge with 4 goals each. Redshirt freshman Brady O’Donnell and junior standout Tucker James got a pair each as well. On the day, 10 different players registered at least 1 point.

In the first five minutes both teams were in limbo with no goals. But, Bryant’s offensive unit came alive and never looked back after a goal from sophomore Tom Kennedy. By halftime the Bulldogs led 9-1. By the 4th quarter, the team was up 12 to 1. Bryant’s ability to move the ball and find open shooters ultimately allowed them to come away with the win; the loss against Marist in the NCAA First Four last year may have given them extra motivation on the day.

Manhattan’s brand new head coach Drew Kelleher no doubt had a tough day, but it should be noted that he helped his previous team, Boston University, lead them to receive national top 20 rankings. This team has potential in the long run, especially with sophomore Michael Zingaro between the pipes. Besides giving up 16 goals, Zingaro stopped 17 shots out of 33 on goal, and put up a fight; he has similar defending characteristics of Bryant’s senior goalie Gunnar Waldt.

Bryant’s ability to control the pace of the game was mostly credited to the face off game, where Kenny Massa, the younger brother of Tewaaraton Award Watch List Kevin Massa, arguably one of the best faceoff players in the country, dominated the X, going 19-22 and picking up 12 ground balls. Bryant’s Coach Mike Pressler even said that Kenny is a more versatile player than Kevin going into Saturday. Watch out Trevor Baptist.

On the day, Bryant’s attack and midfield unit has a ton of depth going into 2016. While only averaging 8.2 goals per game in 2015, Coach Pressler said the the goal is now 10.

The Bulldogs faceoff against the Bucknell Bison on Saturday February 13th at 1:00pm.

I will be doing play by play, LIVE and for free on www.NECfrontrow.com. For more updates, follow @Bshaps_ on Twitter. 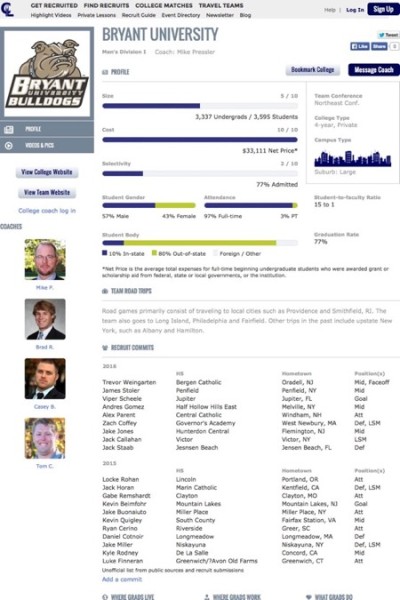