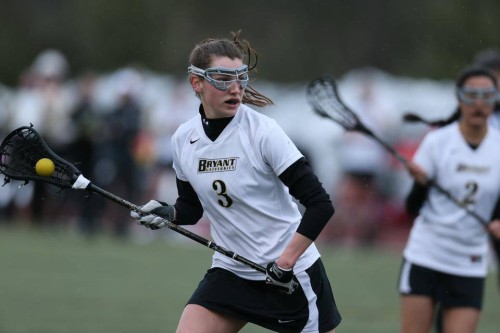 Originally scheduled for Saturday, the Bryant and Vermont season opener was moved to Monday due to extremely cold temperatures.

Bryant Junior Shannon Sullivan got the Bulldogs rolling with the first goal of the contest at the four-minute mark. Vermont’s Meredith Moore quickly retaliated evening the score. At the half, Bryant led by one goal. But at the start of the second, Vermont’s Brynne Yarranton knotted the score. Eager to pick up the pace of play, Bryant junior Emily Columbus retaliated with a goal and the Bulldogs never looked back, going on a four-goal run.

Desperate to fight back with three minutes left in regulation, Vermont’s Alex Bernier brought the Catamounts within two goals. But strong ball movement by the Bulldogs put an end to a potential Catamount run. With one minute remaining, Britton and sophomore Laura Fullam found goals to solidify the Bulldog win.

“The defense came up with a lot of stops that set the tempo for us on offense,” said Bryant senior captain Nicole Britton. “We focus on following up a positive with a positive on both ends of the field.”

Vermont’s attack unit of Meredith Moore and Alex Bernier were a threat the entire game. Moore registered a hat trick and an assist, while Bernier picked up two goals and two assists. But Bryant’s sophomore goalie Sam Santeramo was stellar between the pipes, making nine saves off of 16 shots. Santeramo came up big late in the second half, making two saves 15 seconds apart from each other that ended a potential run by the Catamounts.

On the opposite side of the field, Vermont’s Maddy Kuras had 12 saves while facing 23 shots. The Catamounts also fought hard for the balll; Micaeala O’Mara and Meghan Cobb both picked up three ground balls and had two caused turnovers. But it was not enough to match the quick Bulldogs.

“I think we played incredibly well today. Our offense had a great showing, considering seven of us found the back of the net,” said Bryant senior captain Lauren Descalzo. “Our draw game was solid that really allowed us to control the game.”

The Bulldogs will have a short week, as they take on UC Davis this Friday at the Bryant Turf Complex. Game time is set for 1:00 p.m. and will be streamed live on www.NECfrontrow.com