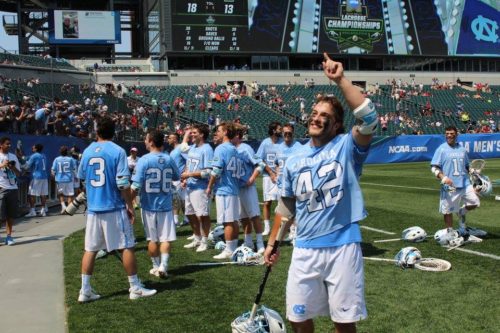 Championship weekend in Philadelphia was all a lacrosse fan could ask for.

Heck, it was all a sports fan could ask for.

There were five games played at Lincoln Financial Field in Philadelphia. The final scores tell a story.

The best of lacrosse was on display all weekend. The games featured tremendous scoring, a fast pace, impressive comebacks, edge-of-your-seat drama and much more.

To quickly recap some highlights… In Saturday’s second semifinal, Brown erased a 14-10 deficit with less than 10 minutes remaining by scoring the final four games of regulation before top-seeded Maryland pulled out the victory in overtime. In the Division III Title Game on Sunday, Salisbury used an 8-0 run to open a 12-4 lead with 9:12 on the third-quarter clock, but Tufts responded with a 7-0 run of its own to pull within 12-11. However, that’s as close as it would get as the Sea Gulls won, 14-13. In Sunday’s Championship Game, a tight game saw UNC score the final two goals of regulation before pulling out the victory in overtime.

More than any big goals, great defensive plays or big saves, the greatness of college athletics was the biggest takeaway from the weekend.

What you had in championship weekend was student-athletes playing for the love of the game. Why did Dylan Molloy of Brown play with a broken foot on Saturday? He loves the game, loves his teammates and wanted to do all he could to help his team win a national title.

“Physically, I’m pretty beat up,” said Molloy after the game. “My foot’s killing me, but I needed to be out there after last weekend. Being on the sidelines is probably the hardest thing ever. So whatever the risks were, I had to take it. I just needed to be out there with my teammates once more. I’m happy I did it, for sure.

“We haven’t gotten the x-ray just yet, making sure there’s no displacement of the bone or anything like that. Hoping that turns out well. But I’m happy I did it. And I was proud to be out there.”

“Dylan is one of the toughest men to ever put a lacrosse helmet on, to play this game with a broken foot,” said Tiffany. “To play with a Jones fracture, the fifth metatarsal, is phenomenally heroic.”

Molloy’s case is the most obvious example of student-athletes playing for the love of the game, but there are other cases. What made Tufts not quit and fight all the way back to within one after being down eight in the second half? Early in Monday’s overtime, what made UNC defenseman Zach Powers absolutely lay out to disrupt Connor Kelly’s shot? If he didn’t lay out, Kelly may have been more comfortable and may well have sent the Terps home National Champions.

Two other stories recently came to the forefront that need to be noted. North Carolina dedicated its quarterfinal win over Notre Dame to head coach Joe Breschi’s late son, Michael, who died in an automobile accident when Joe was head coach at Ohio State. That quarterfinal game was played at Ohio State’s Ohio Stadium.

“They decided to dedicate the game to my son Michael,” said Breschi to the Baltimore Sun. “At that point, we knew it wasn’t about individuals, but we were all in this together.”

There was also a special moment on the opposite sideline as just moments after Monday’s heartbreaking defeat to North Carolina, Maryland head coach John Tillman was spotted with five-year old Fionn Crimmins. Crimmins is fighting leukemia and has been an honorary member of the team since October. Although it pained him having lost, perspective was not lost.

In talking about his Brown University team, Tiffany accurately speaks for all the teams in saying.

“Bottom line, we just didn’t want this thing to ever end.”